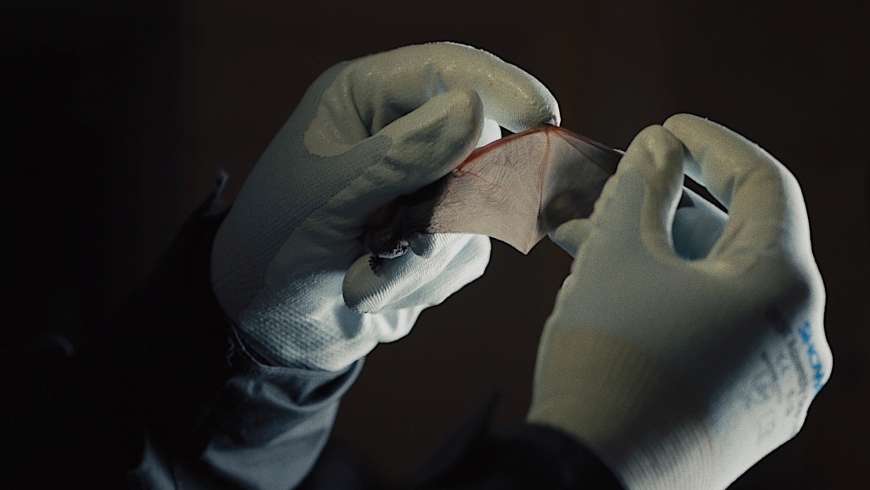 The Edge exhibits the moving-image works by Maeve Brennan and Imran Perretta which were commissioned for the Jerwood/FVU Awards 2018.

Responding to the curatorial theme, Unintended Consequences, the two artists’ works reflect the complex, entangled nature of the present moment, with world events so volatile and turbulent that it’s hard to predict what might happen next.

Maeve Brennan’s Listening in the Dark gathers a series of subtle but penetrating soundings of human beings’ impact on the natural environment. Its focus is a creature that has often fallen beneath our radar: the bat. Undisturbed, and largely unchanged for millions of years, the bat's nocturnal rhythms are being increasingly interrupted by the presence of wind turbines. While noting how these well-intentioned technological developments are affecting the atmosphere in ways we do not always appreciate, Brennan also illuminates how scientific research has revealed a whole sensory dimension that we were previously oblivious to. There is a growing awareness of the ecological damage humans are causing, yet, as Listening in the Darknotes, we can also be strangely blind to things that happen outside of our consciousness.

The Jerwood/FVU Awards are a major annual opportunity for moving-image artists in the first five years of their practice. The open application programme invites artists to make proposals for ambitious new works, two of which are selected each year by a panel of experts. Maeve Brennan and Imran Perretta were selected from over 170 applicants by Noor Afshan Mirza, artist and co-founder of no.w.here; George Vasey, co-curator, Turner Prize 2017 and curatorial fellow at Newcastle University; Steven Bode, Director, FVU; and Sarah Williams, Head of Programme, Jerwood Visual Arts.

The Jerwood/FVU Awards 2018: Unintended Consequences are a collaboration between Jerwood Charitable Foundation and Film and Video Umbrella, in association with University of East London. FVU is supported by Arts Council England.