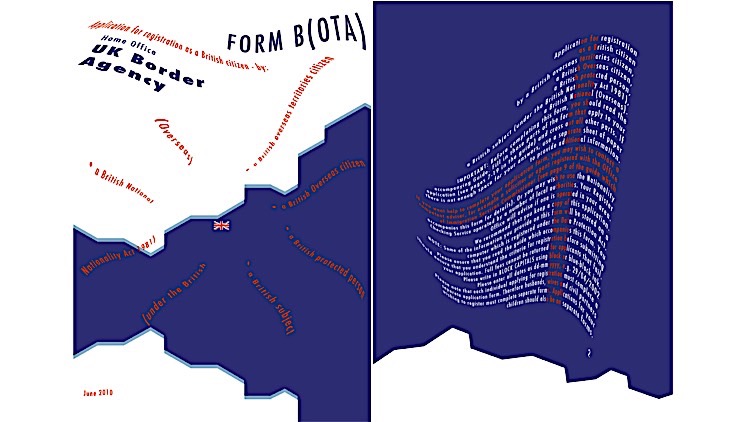 Nick Crowe and Ian Rawlinson’s From An is a series of downloadable PDFs that playfully re-imagines the fifteen different application forms for residency and citizenship available from the UK Border Agency website. Highlighting the competing claims of individuality and standardisation, the works bring personality and humour to a soulless, sometimes fraught administrative process that discourages self-expression as much as it demands self-disclosure. The project also resonates with key aspects of Schwitters’ life. In Thirties Germany, he was asked to lend his widely respected commercial design skills to a complete overhaul of the official print media of his home city of Hannover – his use of the Futura typeface on day-to-day documents and forms attracting opprobrium from the Nazis, who later sought to ban the font from circulation. After fleeing the country, first to Norway and then to Britain, Schwitters’ identity was increasingly defined by his refugee status – his own requests for UK citizenship stymied by bureaucracy, and only granted, poignantly, the day before his death. At a time when many international borders are becoming more relaxed (albeit with others patrolled all the more tightly), From An reflects on our contemporary desire for freedom of movement. (The ‘An’ of the title being both the German word for ‘to’, and also a subtle allusion to the AN Other place people want to get to from the place they are departing from.) The dissemination of the artists’ fifteen separate collages via social media adds a further twist. Gaining admission to the multinational platforms of Twitter or Facebook generally only requires us to complete an online form imparting basic personal information. Access might be relatively straightforward but exiting afterwards can be surprisingly complicated. As the retention of private data by these global media giants becomes an increasingly hot topic, Crowe and Rawlinson remind us how, in our intimately connected online world, national borders are not the only lines we cross.