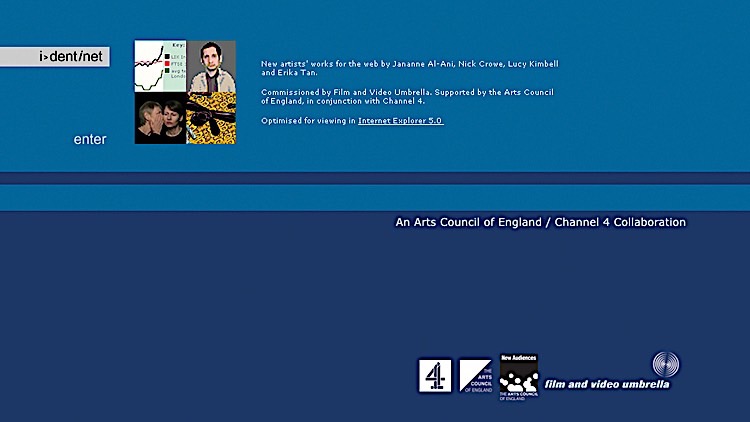 If television is, to a large extent, a mirror of the society it represents, today’s complex, multi-channel reality reflects back a mosaic of different, parallel identities. The picture has been fragmented even further by the arrival of the internet (and, most recently, by the rise of social media). This project, dating from 2002, measured and anticipated some of these changes. Multi-platform in its nature, it consisted of four commissions in which an ongoing online presence was accompanied by a short film on each of the artists that was broadcast on Channel 4. Lucy Kimbell expanded her LIX Index initiative (first seen in FVU’s ‘Slipstream’ from 2001). A meticulous year-long survey of her personal, physical and professional highs and lows, benchmarked against a number of playful but unbending ‘performance indicators’, it offered a pre-echo of an increasing fascination with the symbols, and fluctuations, of individual worth and status that would be manifested not long after in the BBC’s Celebdaq and Sportsdaq games.

Nick Crowe’s Avatars commission was similarly ahead of the curve. Delighting in the cartoonish, exaggerated guises by which people chose to display themselves in online chat-rooms, Crowe introduced a new set of off-the-peg identities modeled on more everyday subjects. Erika Tan’s Re-fresh_ was a comment on an accelerating desire for novelty, and a digital facility for customisation and personalisation. Tracing the different permutations of a palette of screensaver options, Tan’s piece played with aesthetic associations and cultural stereotypes around colour. Evoking a game of Chinese Whispers, Jananne Al-Ani’s Tell/Tale located identity within the orbit of the family, while subtly highlighting its mutable, interdependent nature.

Identinet was commissioned by Film and Video Umbrella in collaboration with Arts Council England and Channel 4 Television. The project was supported by the New Audiences Fund of the Arts Council of England. The online commissions were created in conjunction with a series of individual artist profiles (produced by Maverick Television) broadcast on Channel 4 as part of The Slot during April 2002.

The archived version of the Identinet website has been rebuilt in order to contextualise the project and make the site self-contained. At the time of production, there were links to external sites and reliance on third party software which may no longer exist. Any biographical details are as they appeared on the site at the time.