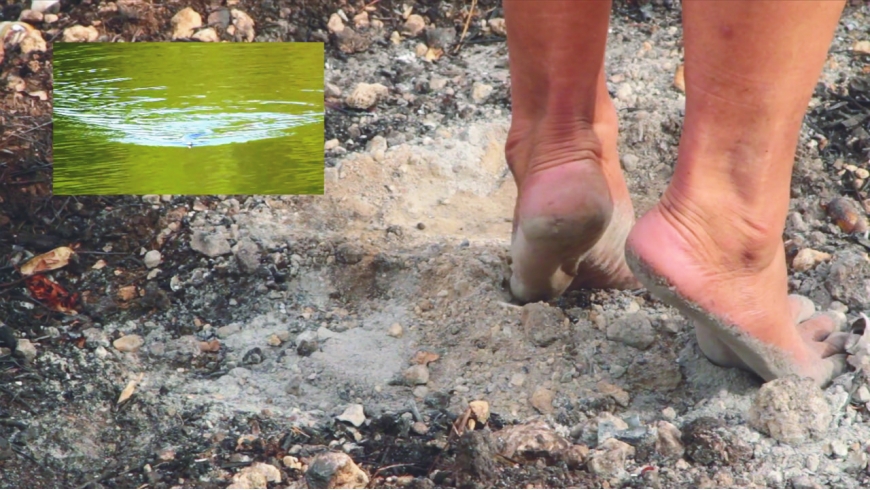 In the opening scene of Alberta Whittle’s RESET, 2020, the artist invites the viewer to join her in a meditative exercise, offering us a chance to pause and focus on our breathing and our bodies. Past lives are evoked as Whittle guides us through a meditative communion, intercut with vignettes of family photographs and flickering candles. How grief might be revealed to us through meditation and somatic awareness is suggested throughout the film, from the murmuration of starlings against a deep pink sky and iridescent silver fish moving through shimmering waters, to rain falling on lush emerald leaves.

The splicing of self-shot and found material is central to Whittle’s practice; she layers video with animation and text to create her own Creole – the types of speech which emerged across the Caribbean (and the globe) from the blending of languages of enslaved and diasporic populations as a consequence of colonial European trade routes. Indeed, the ocean and the shoreline form structural leitmotifs throughout RESET, bringing the viewer ‘within a wave’. This includes the costumes of Whittle’s participants who are draped in rope-like waves of fabric, replete with shells. Poignantly, the continuous sound of waves conveys the artist’s meditative search for reunion with black lives violently lost. Reinforcing this impression, Whittle presents a cacophony of voices as both a celebration of possible reclamation but also its absence; in one voice-over, Whittle laments the loss and dispersal of her chosen family: ‘How strange to lose the spaces of solidarity, of one’s own boundaries and still touch … nothing.’ The fact that Whittle describes her performers as ‘accomplices’ implies an almost theft-like movement to recovering these destroyed, stolen narratives.

In a year of permanent black mourning, the visual dissemination of black death was relentless and traumatising – there was no respite from the global climate of anti-blackness. If Whittle’s previous work between a whisper and a cry, 2019, examined anti-blackness through the lens of the climate crisis and geographic privileges, then RESET moves noticeably more slowly – it is akin to a mournful procession. We witness a dancer moving around a typical British stately home and garden; somebody performing limbo repetitively beneath a car with Cuban registration; a Black Lives Matter protest in Barbados. These sequences, some of which are ambiguously framed or left unresolved, become a metaphor for the importance of transnational conversations, but also the imperial histories that connect us all. These transnational conversations become particularly important in the context of the Covid-19 pandemic, where human rights are curtailed and police ‘enforcement’ has stepped up, often in nations already ruled by anti-Black and xenophobic governments.

Whittle’s disruption of historical events into contemporary discourse starkly presents us with the afterlives of slavery. One such example is Whittle’s incorporation of limbo, a dance which first emerged in Trinidad in the 19th century that recalls the enslaved African people entering the low galleys of a ship while also turning their gaze up towards spirits which have crossed into the next life.

While public interventions by the artist and her collaborators make and reclaim space otherwise denied them, Whittle presents the labour and physical cost of this activity as something metered against the necessity of rest, reflection and healing. This is evident when one of Whittle’s accomplices dances throughout the house and grounds of a large stately home while another lies asleep resting. The visualisation of black people at rest, particularly inside a British stately home – with all its associations of whiteness and privilege – provides a powerful image set against the historical place of slavery and apartheid, and its continuing legacies.

In 2020, a report titled Connections between Colonialism and Properties now in the Care of the National Trust, Including Links With Historic Slavery revealed that many of the UK’s stately homes were built from the proceeds of chattel slavery, which ignited an aggressive response of denial and ignorance from Conservative MPs. Intervening in these spaces is a tactic for drawing out some of these erased histories, while also reckoning with the UK’s colonial past, advocating reparative justice and centering the historical and contemporary voices of people of African descent. The institutional and systemic abuse of black people continues, as seen in the violent deportation of black British people as part of the UK government’s hostile environment policy, becomes yet another example of the ‘brutal colonial re-imaginings of the slave ship and the ark … in the form of the prison, the camp and the school’, as Christina Sharpe observes in In The Wake: On Blackness and Being.

A scientifically rendered animation of person on a ventilator appears in the second half of the film, a sight many of us have had to bear witness to during this Covid-19 pandemic. The imagery, however, equally reverberates with the horrific murders of black people by the police and state agents in the US and the UK, through methods such as chokeholds. The three words ‘I can’t breathe’ have become synonymous with black death across the world. In this context, Whittle’s opening invitation to partake in a meditative breathing exercise takes on numerous significations. As we mourn the victims of anti-blackness, we also mourn the disproportionate toll of Covid-19 on black people and people of colour. This sobering conclusion is also made by Saidiya Hartman on the conditions of black life and death in the wake of slavery: ‘skewed life chances, limited access to health and education, premature death’.

A low, funereal hum moves through your body while watching RESET, forging the cumulative sense of a desire to be seen and to be loved in an anti-black world. These desires are continually denied, and Whittle releases this painful state of awareness in through poetic testimony: ‘The wracking longing to be seen as only myself, not just as only, as a vessel of ages.’

Harvey Dimond is a runner-up in the Film and Video Umbrella and Art Monthly Michael O’Pray Prize 2020.