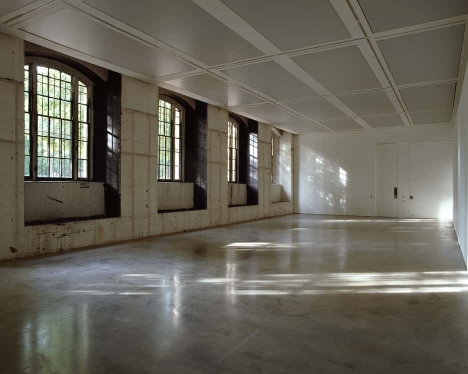 Over 15 years ago at London’s ICA, a seemingly blank reel of film played on a loop: Cerith Wyn Evans’s Take My Eyes…. During the course of the exhibition, the empty film buckled with the heat of the projector, the surface flecked and pocked with dust and scratches. But as the celluloid support was worn away with each pass through the gate, conversely the film became materially more present; the projected image was more than just illumination, it tracked the film’s double movement of protention and retention, in which the film’s return from spool to spool recorded its passage through time, as if Wyn Evans had willed together the component parts of absence to form a presence.

Any attempt to ground the trace in the here and now results in a wild goose chase to another place, another referent or another time. If the trace is a memento of what has already passed – or how we look towards the past – Tony Conrad’s ‘Yellow Movies’ series of works seems to pre-empt its own material deterioration some 50 years in advance. Indeed, one might also glean a sense of the future as something physically embedded into a film. Leaving a single-frame of film to screen for 50 years would be technically impossible – it would break, burn or disintegrate within days, if not hours – yet Conrad circumvented this problem by developing his own economy of materials that explored the intersection between film and painting. Taking white film emulsion or ‘blooping’ ink – an ink is used by editors as a dense, fast-drying dye to suppress the noise of a splice – he painted a square of white over a black frame on photographic backdrop paper and presented it in a well-lit gallery space. This ‘single-frame shot’ has since become Yellow Movie; the longest screening film. The paper onto which the light sensitive emulsion has been applied has not only acquired wrinkles and tears but, as the title suggests, is slowly fading to yellow and oxidising in the light.

Deterioration is central to both Yellow Movie and Take My Eyes…. Wyn Evans played with these ideas throughout his first solo UK exhibition, including in the installation Décor, named after Marcel Broodthaers’s final exhibition in 1975, and which had a profound effect on the artist when he saw it as a teenager. For this work, Wyn Evans removed the lower portion of the gallery wall that faces out onto The Mall, revealing the passing traffic, shifts in light and ankles of passers-by, weaving an external theatre bound by contingencies of time and place as a further thread in the fabric of the work. The interruptions and disruptions of transient chatter, passing footfalls or police on horses drifted into the gallery, in a move reminiscent of John Cage’s 4'33" – a well-thumbed example in which disruption or interruption (coughs, scuffles, sighs and the like) inform the texture of what we understand as silence or empty space. Cage reframes these components as the primary substance of the work so that blankness becomes full, dense, generative and pregnant with possibility. Indeed, the more attempts made to pin it down, the more it seemingly slips away into other moments: the inescapable trace of a ‘something’ in the ‘nothing’ grows to consume every structure of reference around it just as physical traces grow to wear and consume the material structure of the films of Conrad and Wyn Evans.

Tellingly, however stark or sterile a blank space may look to the human eye, it is time that slowly raises its interruptive head. Yellow Movie (12/17/72) is such a work, its white ‘dot’ slowly changing colour over decades. The film now lives up to its name as the yellow colour-producing chromophores rise and settle, fuzzy and damp on the film’s paper surface. Conrad titled the work in the hopeful anticipation of this particular process of interaction between molecules and sub- microscopic particles. Yet this form of ecological presence, such as those of material-eating bacteria or dulling-chromophores, is so often fought against. Nowhere is this more apparent than through the act of conservation, which strives to undo natural ecological and material processes, boldly asserting human intervention over ruination; a celebration of the human capacity to override and correct entropic processes. But Conrad’s Yellow Movie reconfigures this dynamic and brings to mind Matthew Sweet’s assertion that analogue film’s ultimate destiny, if left alone and ignored, is a colony of mould.

Whether considered as a system of traces or a site of ecological activity, the blank space establishes itself as a place of constant interplay, process and change because by nature it is open and receptive; it is a host site for the abstract and physical impression of ‘other’. Blank space is no longer akin to a logic of reduction, of paring something back to its minimal form, nor is it a ‘negative space’. Instead, the blank space functions as a commons, a shared space between the human and the more-than-human, throughout the past, present and future.

From a sequence of collected fingerprints and dust particles to shadows, scratches and smudges, the blank space is perpetually gesturing away from itself, to other referents, interactions and moments in time. As such, the blank space is never a nothing, but an everything.