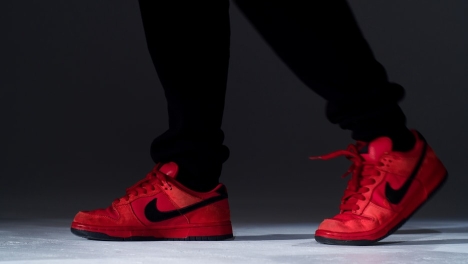 A 2019 commercial for the Royal Air Force aims to dispel the myth that women cannot and should not enlist. Over footage of women in combat, working on ‘top-secret’ surveillance and marching on patrol in full regalia, plays a soundtrack of clichéd marketing phrases from hair care, fashion and make-up advertisements, such as ‘I want to combat the signs of ageing’ and ‘I can’t believe we turned up wearing the same thing’. The uneasy dissonance of this juxtaposition is cemented when we hear the RAF’s final statement that ‘women should be defined by actions, not clichés’, and that they should bypass hackneyed stereotypes of western ideals of youth and beauty and instead serve in the UK’s aerial warfare force. Both the footage and audio represent regimes of power and control: one supports UK government foreign policy and the other dangerous ideologies that target and subjugate race, class and gender.

Artist Danielle Dean operates in this vernacular. Through her multilayered video, performance and sculptural installations, Dean reflects on the influences imposed on us by marketing strategies, and how our subjectivities are constructed within the web of late-capitalism. Dean aims to détourne commercial strategies by cannibalising television adverts, splicing the footage with her own filmed sequences.

In an early work, No Lye, 2012, five women dressed in nude slips, camisoles and shorts are gathered in a cramped bathroom. They clunkily orate slogans plucked from beauty advertisements from Ebony and Vogue magazine – ‘beauty is skin deep’, ‘naturalise, it’s in our nature to be strong and balanced’ – and from political speeches – ‘we must protect our borders’, ‘we are fighting for our way of life and our ability to fight for freedom’. What results is a fractured, nonsensical dialogue between the women in which the rhetoric of beauty and politics becomes strangely porous. Later in the video, noises of a political uprising seep in through the bathroom’s open window and we realise that the women might be in imminent danger. They convene to fight the growing forces around them, producing what looks like an explosive device in the bathtub. Dean’s title for this work, No Lye, is a homophone of no lie – toying with the worn out but loaded rhetoric and propaganda uttered by her characters. Lye is a caustic substance used for washing or cleaning, but also a key ingredient in hair-relaxers. Lye hair relaxers are an abrasive hair product that are painful to use and can sometimes lead to chemical skin burns, while no-lye relaxers are kinder to the scalp but slower and less effective. Fittingly, Dean’s film takes the form of a ‘bottle episode’, a name given to an episode in which all the characters and actions take place in one room. Offering a microcosm on how collectives operate, No Lye ponders a political predicament: should the women in the bathroom employ the potentially faster but more unpredictable and deadly route to change through a bath-made bomb or employ diplomacy, the no-lye equivalent – a slower, less immediately effective option.

No Lye recalls the New York-based art collective Bernadette Corporation’s anti-documentary Get Rid of Yourself, 2001–03, a similarly disjointed narrative which adopts clichéd feminised chit-chat. The film comprises found footage of Genoa’s G8 summit in 2008 interlaced with shots of model/actress Chloë Sevigny in the kitchen of an unadorned apartment reperforming and repeating sections of activists’ statements, as if she was blithely rehearsing them for a play. Sevigny’s bright white smile, bobbed blonde hair and floral dress is in stark contrast with the hordes of masked protesters that typically shout these same lines. Sevigny, along with the women in No Lye, is what the French collective (and collaborators on Get Rid Of Yourself) Tiqqun would refer to as the ‘young girl’. As described in their 2012 book Preliminary Materials for a Theory of the Young Girl, the ‘young girl’ – a state of being, rather than a specific demographic – is the ideal commodity, the blueprint-being and model citizen of consumer society, and a reminder that we are all agents of social reproduction.

Dean and the members of Bernadette Corporation began their careers working in advertising agencies, Dean in London in the late 2000s and Bernadette Corporation in New York in the mid 1990s. This decade is characterised by the rise of youth-oriented consumer capitalism, when megacorps began to sell idealised lifestyles through their products. Brands were becoming omnipotent and, as Naomi Klein reminds us in her era-defining 2000 book No Logo, these companies would focus on ever more elaborate and intrusive marketing schemes, protecting their brand at any cost.

One of these brands, Nike, is the subject of Dean’s series ‘Dunk Low Pro SB “True Red”’ – a version of the popular Nike Dunk basketball shoe for the then burgeoning skateboarding market. Made in red leather with suede uppers, black accents for the ‘swoosh’ on the heel tab and outsole, they were immensely popular. Nike marketed them as ‘vampire’ sneakers because of their colourways which, as Dean has noted, are also the colours favoured by radical politics and the avant-garde; a compelling contradiction to Nike’s corporate identity, although vampirically sucking blood might also be an apt image for the brand’s all-consuming activities.

The first film from this series, A Portrait of True Red, 2016, is a fictional story about a young girl, Sam Jones, who begins to merge with her trainers. Dean constructs the film using recognisable horror genre conventions, such as dramatic low lighting, occasional slow-motion and a well-placed wind machine. At one point, Jones delivers a dialogue unflinchingly to camera intercut with news reports of corporate violence and state-sanctioned brutality towards Nike factory workers, as well as fragments of Nike’s marketing lingo. As the film progresses, Sam’s body becomes further infiltrated by the brand as she begins to mirror gestures from Nike commercials and iconography – for example, she takes the pose of Michael Jordan’s splayed silhouette known as the ‘Jumpman’. True to the trainer’s vampire moniker, the shoes suck the life out of Jones, colonising her mind and body until she becomes a replica of the homogenised masses.

The film resembles the scene in the 2015 rom-com Trainwreck where John Cena’s bodybuilding-obsessed character Stephen is asked by the main character Amy (played by Amy Schumer) to talk dirty during sex. He responds with Nike slogans: ‘Winning isn’t everything, but wanting to win is; You can’t spell victory without t-r-y.’ Nike has infiltrated his mind to the point where the brand’s marketing spiel is the only thing he can access. Another questionable sacrifice to Nike was made by rapper Lil Nas X earlier last year who, with art collective MSCHF, released a pair of limited-edition Nike Air Max 97s trainers called the ‘Satan Shoes’. Using a similar red and black colourway to the vampire sneakers, these reportedly also included a drop of human blood in the shoe’s famed air bubble. When all 666 pairs sold out within a minute amid high-profile controversy, Nike sued for trademark infringement and complained that the public mistakenly believed the brand was endorsing Satanism (vampires are seemingly allowed).

A further bloody account is expanded on in Dean’s True Red, 2016, a wobbly hand-drawn animation that elaborates Jones’s story. The work begins with what looks like an oozing pool of blood from which a ‘vampire’ sneaker emerges. Its black swoosh melts and drips off its side and mutates into a bat, which in turn contorts into a dense oil slick, then a castle before a group of factory assembly line workers. These details of Nike’s production and exploitation fracture and blur into one another, creating a murky lineage and hybrid forms. Dean reappropriates Nike’s own marketing co-option of vampire lore, the artist starkly reformulating the gothic imagery as sucking the lifeblood and resources from workers and consumers before either leaving them for dead or creating loyal followers.

This trail of carnage is also found in an early digital animation by Dean, Numbers, 2014, that notates Nike’s accumulated revenue between 1988 and 2014. As the dividends from each year pops up on screen, the previous years’ numbers fade and drop onto a discard pile of ‘dead’ numbers that accumulates as more time passes. This vampiric accumulation of wealth and of violence concludes with a colonial narrative: die or assimilate, acquiesce to capitalism or suffer the gruesome consequences.

The video installation Bazar, 2018, draws out further interrelations between capitalism and colonialism. For the film, Dean worked with four young women based in Paris, most of them second-generation immigrants from former French colonies. Together they analysed the historic catalogues of iconic French department store Bazar de l’Hôtel de Ville for the ways in which it perpetuates racial stereotypes and reinforces colonial power. The video follows the women as they traverse the streets of Paris using the catalogue’s language to describe various items they encounter along the way, occasionally interrupting these stock phrases with personal anecdotes. The video merges these stories along with seemingly random objects on screen – gardening tools, white goods, a Nespresso machine – rendered in different styles; from archival imagery to illustrations and 3D animation. These divergent aesthetics surreally disrupt time and space; for instance, in one sequence the ‘real’ objects brandished by the characters grow legs and begin to march over a map in a route that represents the spread of colonial power. Along with Dean’s more recent pieces made with gig workers for Amazon’s crowdsourcing platform ‘Mechanical Turk’, Bazar continues her interest in the lives at stake in the production of our everyday commodities.

‘The real guts of TV is the ads, that’s where the backbone of TV is,’ artist Chris Burden declared in an interview for LA MOCA in 2013. Dean has a similarly corporeal take, but one in which bodies are brutally implicated in the commodities we casually possess. The exploitative labour practices, stereotyped subjectivity and racialised and subjugated imagery produced by savage corporations are laid out, blood, guts and all – we’ve all been bitten by the vampire.