The Fish Is Still Raw

Poet and artist Belinda Zhawi draws on her own unique experience of language and food in this essay on Kondo Heller's MU/T/T/ER. 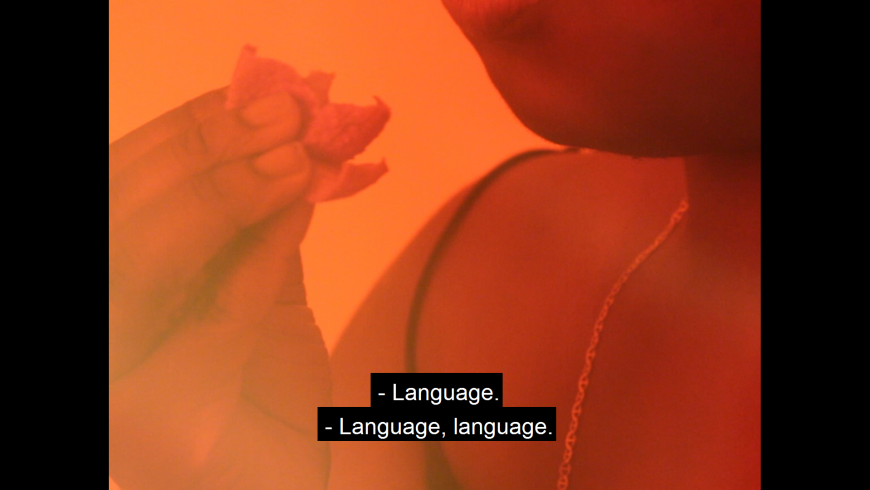 Kondo’s film MU/T/T/ER, as its title suggests, is a cut-up of images and sounds, and a collage of questions. A patchwork of news reports, oral poetry, archive sounds and deeply evocative images, its meditation on personal and shared histories led me on a path of memory and moved me to make connections between the places I come from, the ones where I am now and where I hope to get to in the future. I am a tiny bit obsessed with titbits of information, facts and found material and this piece of work satisfied many aspects of this intrigue. It felt like I was receiving answers to many of my questions but also being invited to ask questions of those questions. Kondo’s film started me on a journey of my own, in which I wanted to explore language, agency, womanhood, protest, fatigue, food, isolation, and meditation. A gumbo of ideas but not nearly as fluid as how Kondo managed to arrange them in audio-visual form. In the end, I settled on the theme of language and food histories and how they can impact personal and collective memory.

Kondo’s film is full of sayings, proverbs and questions (some in English, some in German, some in Swahili). From pain will either change or end – a calming reminder – to...what do I have?

I want to know what has been left for me because even the legacies I can access have somehow been tainted by being birthed out of situations where my ancestors were making the most of what’s left from what was stolen from them. From land to language to sense-of-self to food to name a few. This legacy is deeply visible in how the places I come from relate to one another. I want to unravel the stitching but the garment seems to keep re-stitching itself.

I am a citizen of the land that once colonised my land and I call this new place home.

The fish is still raw.

I am a product of the ‘postcolonial’ point of view that English will leverage you in any society and allow you to access what those who came before could not. The history of my people, in many ways, was and continues to be eroded and diluted the more we live in a ‘global’ society. I even have family members born, raised and based in a Southern African former British colony who cannot speak any of the fifteen official native languages of that land but have a deep fluency in English that would rival the Queen herself. To make sense of my relationship to my first and adopted languages there always has to be an acknowledgement of these histories. Of subjugator and subjugated; coloniser and colonised; and, most importantly, the many ways the one subjugated continues to resist in order to maintain their sense of self in a manner as complete as possible. On the other hand, it is also possible that the one subjugated’s sense of self can be eroded to the point of almost no return.

Eighty percent of the Zimbabwean population self-identifies as Shona. Other dialects, like Zezuru, Ndau, and Karanga are also names interchangeable with the names of the ethnic groups under the umbrella of Shona. To understand this, again, one must look at how the history of British settler colonialism has classified groups of people who have been native to that part of the world for many centuries and othered them to each other.

How do these loose yet codified classifications and generalisations affect how a people speak, engage with the land around them and how they sustain themselves throughout time? Is it possible to speak about the history of a people’s food or language without speaking about land?

All substantial changes in a society's linguistic form may be traced back to a historical occurrence altering many aspects of a language. In most cases by introducing new lexemes to denote previously undefined elements, objects, sensations, and attitudes. This can also enhance the language by borrowing terms from other languages and coining new terms to describe new objects and events that may be unfamiliar to them.

When new words enter a language as a result of a historical event, history enriches the language in this way, and the language, in turn, maintains that history in its vocabulary. As a result, language and history become mutually, inextricably linked.

I don’t care what language I learn I want to know who I am beyond this tongue my coloniser left me.

During the first lockdown I found myself learning Kiswahili on Duolingo and eating huge helpings of the foods I was raised on: sadza, mealie porridge, samp and other maize foods.

Learning Swahili has been fascinating as it’s helped me to navigate my first language in a different way. In a way that feels like a reassurance that my mother tongue can never become a foreign language to me. The hybridity of this new language intrigued me as it feels familiar. It helped me to start thinking about how much movement had to happen for such a language to become. How much erasing and how much adding... a tool to divide and benefit from. Which led me to start thinking about shared customs, food and histories.

Through past knowledge, lockdown FaceTimes with my grandmother and Wikipedia, I learnt that millet and sorghum were some of the main grain crops, along with leguminous ones, a variety of vegetables, such as pumpkins. I wanted to interrogate why my people ate so much maize; how and when it became a staple that followed me 6,000 miles away from home onto my lockdown plate and South East London upbringing; when it became comfort food, necessary food. The answer is, of course, capitalism.

By putting traditional grain crops on the back burner on the commodity market, the white colonial authority indirectly pushed maize cultivation. Traditional grain crops, such as millet variants and sorghum, which had fewer market options, suffered a significant decline in this regard. Maize served a dual purpose: it served as a staple crop and it also served as a food source and as a cash crop, which explains its sudden ascendancy in regions where traditional crops were previously grown.

Inglish is a foreign anguish

There are many images, in MU/T/T/ER, that explore food – cooking it, growing it, sharing it. They tie in with a lot of the questions I spent asking myself whilst in isolation. Questions about how settler colonialism affects the ecologies of colonised spaces; the effect that has on pleasure, community, labour and security. How it changes a people’s access to food, how they eat and also what they can eat. How these new ideas become part of the culture in a way that is indelible even; history cannot refute the presence of these introductions.

The all-familiar image of a mango being chewed down to the seed. Nothing left behind. Washed greens, draining dishes, a bowl of ripe aubergines.

Kondo’s overlay of sounds and interweaving of English into Swahili or German echoes some of these concerns of mine about what is lost or gained when these spaces coincide. Who gets to own the land, the ideas, the cuisine and what happens to what existed before?

A distorted M. NourbeSe Phillip announces the title of her poem ‘Discourse on The Logic of Language’ – a poem that guides the listener by the tongue asking: what is my mother language? Language, lan, lan, language turning into ...anguish, aaa, anguish – over an orange peel shaped like a fish’s mouth.

Belinda Zhawi is a Zimbabwean-born writer, sound artist and educator currently based in London. Her work explores Afro-diasporic research & narratives.