Cassandre Greenberg considers Derek Jarman’s Blue as a celluloid artefact in an age of portable digital media. Winner of the Michael O'Pray Prize 2019. 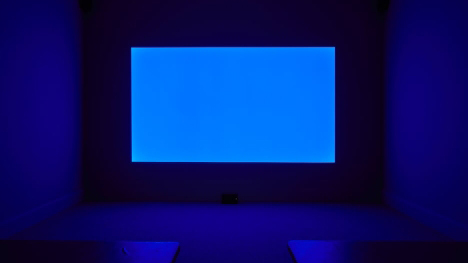 Celluloid is a gelatinous layer of silver crystals suspended precariously atop plastic tape. Like the retina of the eye, a reel of celluloid film is touch-sensitive: the least abrasion – even a slip of the projector’s mechanism – registers as eruptive. A disturbance that is rescaled as though through the distorting lens of sensation, an analogue of the over-sensitivity of the grandiose eyelash unglued from its lid and lodged into the orb of the eye.

The first time that I saw Blue, 1993, by Derek Jarman – his final feature film before his death from AIDS – was at London’s BFI in 2015, which screened a digital version of the original 35mm celluloid film. Projected across the vast screen, I was immersed in a hallucinatory awe brought on by the static Blue screen. A famous negation of the cinematic demand for an unfolding of moving images, Jarman’s Blue screen is an otherworldly placeholder; the viewer held in a temporary recreation of the blindness that progressively overtook Jarman as his illness progressed.

The cause of Jarman’s blindness was retinal detachment. ‘The damaged retina has started to peel away,’ he says in Blue, ‘leaving the innumerable black floaters, like a flock of starlings around in the twilight.’ For Jarman, retinal detachment was a side effect of an acronym that clusters around the totalising assemblage of AIDS. His blindness was caused by CMV, or cytomegalovirus – a relation of the cold-sore virus – whose mechanism of alien-largesse produces massively enlarged cells. In the world of heightened signification and weakened immunity, CMV is an ‘AIDS-defining condition’, part of the diagnostic criteria that signifies a shift in significance – from living with HIV to dying of AIDS.

The Walker Art Center boasts on its website that it owns a ‘pristine’ celluloid print of Blue. Owing to ‘conservation concerns’, however, the original was semi-retired from permanent display over fears that continuous looped projection would cause irreparable damage. As a result, the gallery opted for a jerry-rigged solution: a flickering projector with a window painted in a perfect shade of International Klein Blue.

As a prophylaxis against permanent decay, the organisation chose a Blue in bits and pieces, cryogenically preserved in a digital afterlife. A mechanism recreating a similar image with presumably the same effect, no noticeable shift in significance. Outside the conditions of preservation and the time-encapsulated image, there is the latent film reel that exists in the unruly world of atmospheres: threatened by the opportunistic forces of humidity, elevating temperatures, molecules of contemporary dust and bacteria.

What degradation would have been wrought from 20 years of constant looping play? In my mind’s eye, I imagine a version of Blue aggressively cross-hatched by time, the exertion of each revolution of the reel scored as a visible return. Scratches and scrawls dart, as though imitating the liveliness of bacteria persistently engaged in rapid growth. Eventually only a light shaded by Blue’s remainder is returned.

There is an irony in the preservation of a film that is ostensibly about the degradation of clarity. We undertake preservation to avoid loss; a symbolic act that underscores the fragility of all carriers, especially the body. Yet acts of preservation perpetuate their own losses – in replacement of the reel in favour of the digital image, there is a loss of sensitivity to a material, of fidelity to an idea. Blue – as film and form – creates a double-bind that heightens the inherent tensions that exist between material fragility and the impulse towards posterity, emphatically underscoring its existence with the surety of its own disappearance. Through the lens of his personal loss, Jarman shows the gradations of loss that shade all living.

In a conversation with Scott Bukatman, phenomenologist and film critic, Vivian Sobchak describes the experience of watching horror films as ‘watch[ing] them in my lap’, eyes turned down from the screen. In probing her mode of viewing – or lack of it – Sobchak realised there was a connection between the ‘obscene space’ of horror films – the ‘off-screen space in which the monster’ awaits – with the ‘oblique’ space of the cinema or living room. As a viewer, one is not only immersed in screen-space but also the oblique space of viewership – in a body, in an environment. Thus the obscene space intrudes upon corporeal reality. Fright turns one away from the screen, arguably returning one to the peripheral space in which the threat awaits.

Horror’s interplay with the partiality of vision that Sobchak describes is only one mechanism that alerts the viewer to oblique space: neither outside nor inside the frame, a nether region of emotion and sensation. In watching Blue, I see a correlation between obscured viewing and the oblique space described by Sobchak, but, in Blue, partiality of vision is inversely expressed. The othered space of blindness is pulled into the frame, the occlusion of vision wrought through fogged Blue. The persistency of Blue pushes one’s eyes to the screen’s edge; stasis is hard to watch. Blue alerts the viewer to the peripheral world of the screen, not through the anticipation of change, but in its unchanging insistency.

Simultaneous with the release of Blue on television in 1993, the soundtrack was aired on BBC Radio. In this acoustic iteration, Blue was peeled entirely from the image, Jarman’s voice suspended on air without the support of plastic tape or the screen with which to hold it. Between the ambience of cafes and sea, the spoken narrative oscillates from a voice-over detailing Jarman’s collapse of his health to an exploration of chromatic ambiguity.

This summer, 25 years after Jarman’s death, BBC Sounds re-released the soundtrack of Blue. In the age of the iPhone where technology is mobile and media is instantly available, I downloaded Blue and plugged in my headphones. As I moved through London in the summer heatwave, I walked and listened to Blue in spits and spurts, the portability of Jarman’s hallucinatory vision cut up by my daily rhythms.

I listen to Blue remade in a stuttering version of itself – a viewing experience likely unimagined by Jarman in the early 1990s. Paradoxically, through wireless technology, I am sonically tethered to the peripherality of the screen, my life reformed in the oblique space of Jarman’s cinema; all I see takes on a temporary nature, synthetic scenes constructed for the sake of narrative: I listen to the clatter of a cafe as I make breakfast at home. I listen to Jarman reciting the long list of side effects associated with the medications he is taking as I leave the house in the early morning. Later, I hear the names of friends who have died from the virus as I walk across Waterloo Bridge in the bright summer sun, past the BFI where I first watched Blue. Through my headphones, I hear: ‘I caught myself looking at shoes in a shop window. I thought of going in and buying a pair, but stopped myself. The shoes I am wearing at the moment should be sufficient to walk me out of life.’ The pedestrians cross past me. The voice-over fragments into a final conjuring of an azure Blue sea as I step against the backdrop of the shimmering Thames. While it is usually the viewer who remains motionless as the drama unfolds, instead I move through the rhythms of the day with the sound reverberating through the movement of my body.

What does it mean to review Jarman’s film without an image today? Review. Return. Remains. ‘Re-’ is the word-forming element that proffers the gaining of something lost. ‘Re-’ nudges the modified back to an origin; again, anew, once more. A re-view might be defined by a multiplicity of looks; seeing again, anew, once more. In cinematic terms: a double-take.

In my first viewing of Blue, I saw the image’s lack, the film an attempt to detach cinema from the substance of sight. During this day in June, untethered from the cinema yet embedded in a world of palm-sized screens, I experienced the ubiquity of loss in the surplus of the visible. In Jarman’s parlance, Blue metamorphosises; it becomes a personified embodiment, an infiltrator in the natural world, a pigmented aberration evoking the philosophy of the void. The finite time of cinema – removed from the screen – is transformed into a palpable sense of the infinitude of death. Blue casts its shadow over all I see.

To produce the cinematic image of infinity via almost no image at all is Jarman’s most elegant of acts. Who would have thought the smartphone would be an unwitting co-conspirator to this conjuring? In seeing Blue two ways, in a delayed double-take, the loss that Jarman experienced permeates my being: the progressive unpeeling of the retina conveyed through a cinematic unpeeling finding its most embodied expression in the embedded technology of the portable screen.

That day the sunlight looked more made up than ever. All I really saw was Blue’s absence.

Cassandre Greenberg is winner of the Film and Video Umbrella and Art Monthly Michael O’Pray Prize 2019.