With Paul Rooney's Dust and Bellevue available on FVU Watch, Steven Bode reflects on their themes of limbo and confinement one year into the global pandemic. 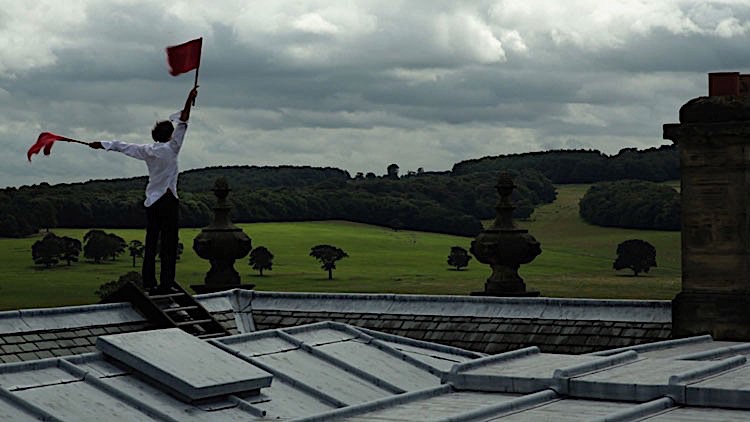 Watch Dust and Bellevue by Paul Rooney on FVU Watch.

The word ‘quarantine’ derives from the forty-day period that trading ships of distant origin or uncertain provenance were obliged to wait outside the port of Venice before their cargo could be offloaded and their crews disembarked. This span of time was deemed sufficient for any sign of onboard disease to show itself, and for the offending vessels to be decontaminated. It goes without saying that forty days is an eternity in our contemporary era of just-in-time container freight delivery, or whistlestop cruise-ship itineraries. But those forty days are a blink of an eye compared to the extended limbo that some ships have suffered in the plague year of the coronavirus pandemic.

At the start of this grim chapter of human history, when the spread of the virus was becoming a global phenomenon, the cruise liner ‘Diamond Princess’ was refused permission to dock in Japan because of an outbreak amongst its passengers and crew. While this ill-starred pleasure cruiser, and others like it, grabbed the headlines, the fate of seafarers working on thousands of cargo ships has received comparatively scant attention. Far from the fast lane of air travel, or the digital flows of networked capital, merchant ships do the unseen grunt work of international trade, lugging huge quantities of goods and materials from place to place. But the people doing that grunt work have been equally overlooked, and even more so over the last twelve months. With landing restrictions in place in many countries, crews have been regularly denied any shore leave, and have been confined to their already cramped cabins for interminable lengths of time. It is estimated that more than 300,000 seafarers have been affected; their shifts prolonged indefinitely, with little prospect of respite, or indeed of returning home. While the commodities they are carrying can freely circulate, the people that oversee their overseas passage are contrastingly trapped, and marooned.

Paul Rooney’s video Dust (2006) is set on a commercial freighter in the North Sea. The piece was inspired by the case of another ship, whose story also sheds light on the iniquities and inequities of globalisation. In 2001, the Norwegian freighter ‘MV Tampa’, carrying 400 refugees that it had rescued from a distressed fishing boat, was blocked from entering Australian waters, triggering a diplomatic incident and inaugurating what in retrospect feels like a harsh new era of insular border controls. The video’s monologue describes the event, as reported on television news, and does so while the camera, in an unbroken six-minute tracking shot, circles the deck of the seemingly immobile ship. Although the camera limits itself to these restricted orbits, the monologue shifts between spoken word and song, between quotidian recollection and moments of reverie and hope. The monologue is voiced not by a seafarer but by a hotel chambermaid, who opens the windows in each of the rooms of her Liverpool waterfront workplace, and stares out over the river Mersey to the sea beyond; evoking ghosts of former cruise ships, and longstanding fantasies of travel and escape. 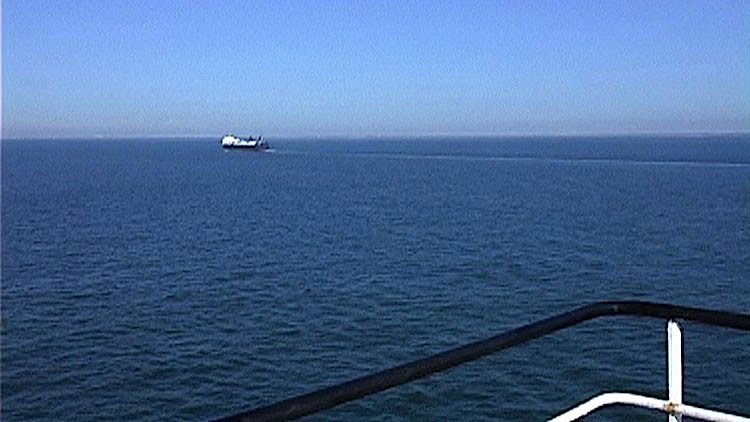 Her repetitive, undeviating work routine – “making the bed, dusting, polishing, hoovering” – positively encourages these flights of fantasy. “I do the net curtains last when I clean a room, because I like to open, look out the window. I like to see.” Past events become present in her memory “like dust particles that we can see in the air only when the bright sunlight streams into the room.” In a year when hotels have lost some of their sparkle as havens of leisure and pleasure and taken on a new function as zones of curfew and containment, her common-sense mantras – “What I always think is, you have to clean that last person out of the room for the next person coming in it” – and her enduring optimism in the face of what seems like obdurate, unchanging circumstance is even more poignant. Rooney’s feel for the unspoken thoughts of the unsung voices within contemporary society has always been acute and instinctive. Here, his focus on the unseen workers whose unnoticed labour helps keep that society ticking over is also hugely affecting.

Rooney’s second project with Film and Video Umbrella, Bellevue (2009), was commissioned in collaboration with the Bluecoat in Liverpool to commemorate the hundredth anniversary of the birth of the novelist Malcolm Lowry. The film takes its title from the Bellevue mental hospital in New York, where Lowry checked in, apparently of his own accord, for two weeks in 1936 – by his account to gather material on the subjects of madness, addiction and delirium that were a mainstay of his writing. Lowry’s life, like that of the hero of his magnum opus ‘Under the Volcano’, was marked by alcoholism and manic mood swings, so one might take his claim that he was only there for the research with a pinch of salt (or a twist of lime). Certainly Lowry would have wanted to console himself with a stiff drink (or three) upon discovering, a few years later, that the writer Charles Jackson had beaten him to the punch with his 1944 bestseller ‘The Lost Weekend’, a deep dive into the world of obsession and binge-drinking oblivion whose instant popular success irked Lowry, even after the slow-burning ‘Under the Volcano’ established his literary reputation for years to come.

Rooney’s film revolves around an ad-agency away day, held in the conference suite of an English stately home, in which a hand-picked focus group workshops the high-concept marketing campaign for an upmarket city-break to New York – one that sets out to channel the bohemian spirit of the 1930’s jazz age that Lowry and his contemporaries were drawn to, and to pack these multiple references and experiences into a madcap hot-weekend: a thrill-seeker’s walk on the wild side through the city that never sleeps; and, importantly, never judges. Watching Rooney’s film again in the dog days of 2021, the mere idea of a bucket-list bonanza or a bar-crawl bender through any foreign town is both the object of serious craving, and a flashback to a very different time – one that now feels like a bubble of privilege, or of hubris and indulgence. That indulgence is writ large in the Noughties jargon in which the marketing campaign is couched, with its talk of ‘brand revision’ through ‘transgressive product content’. But it surfaces also in the plentiful allusions to a longstanding fascination with the truth-telling properties of madness, as manifested at various moments in the past – for example, the radical psychiatry movement of David Cooper and RD Laing, with its provocative view of insanity as an innate reaction to, and understandable flight from, the greater psychosis of everyday society. 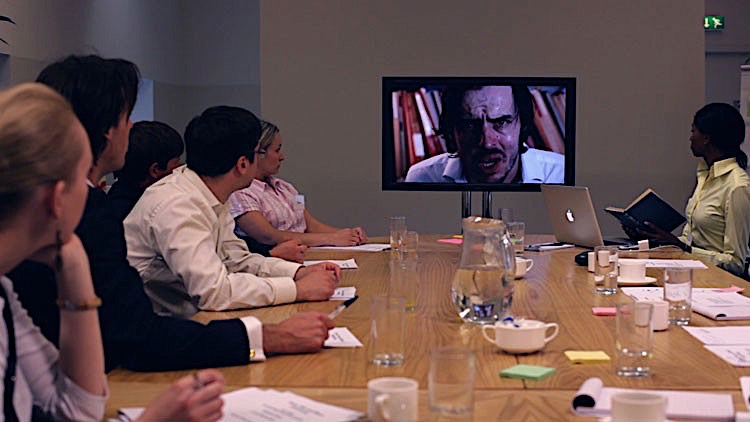 Early on in the film, one of the focus group hallucinates the spectre of his doppelganger, incarcerated in an attic room, terrified of being abandoned. We see him again, looking out of the window at the beautiful view of this stand-in for Bellevue, flying distress flags from the roof, speaking darkly but lucidly about the mythical Ship of Fools, its riotous company of outcast souls replicated on dry land in the form of the psychiatric hospital. The film’s air of temporal and psychological disorientation, and its propensity for worlds-within-worlds deconstruction, reverberates and escalates throughout, as members of the focus group double up as asylum inmates, and as the folly and hyperbole of the marketing ambitions are revealed. Focus group participants talk among themselves, like members of a Greek chorus, criticising the romanticisation of madness as a key to the human psyche, and wondering aloud whether the artifice of art, in its journey to the outer reaches of the human condition, can ever be more than a vicarious experience – a frisson of the extraordinary that the artist can summon and the viewer can share in, safe in the knowledge that they can check out and leave it behind them any time they wish.

In Bellevue and in Dust, a state of enforced or existential limbo is contrasted with a place or a promise of escape – a break from the same-old-same-old of stuck-in-a-rut reality that is, tellingly, not available to everyone; a dream of a better future that is reserved for some but not for all. Twelve months into a pandemic that has stopped much of the world in its tracks, it is clear that the limbo of lockdown has not been felt, or shared, equally, and that any likely roadmap out of it may only repeat some of these structural disparities. Bellevue and Dust resonate powerfully in the spring of 2021, as companion pieces and as counterpoints to each other. Made a decade or more ago, their insights are uncannily relevant, in the light of an overdue emphasis on individuals’ mental health, and a wider appreciation of the many and varied individual contributions that make up a healthy and functioning society. As the dust of lockdown clears, with the hope of a better view ahead, these two films are full of words and images that will linger hauntingly in the mind.

Bellevue was co-commissioned by Film and Video Umbrella and the Bluecoat, in association with Harewood House, Leeds and Spacex, Exeter.