Nadeem Din-Gabisi, writer and director of MASS, articulates the thinking and process behind his film. 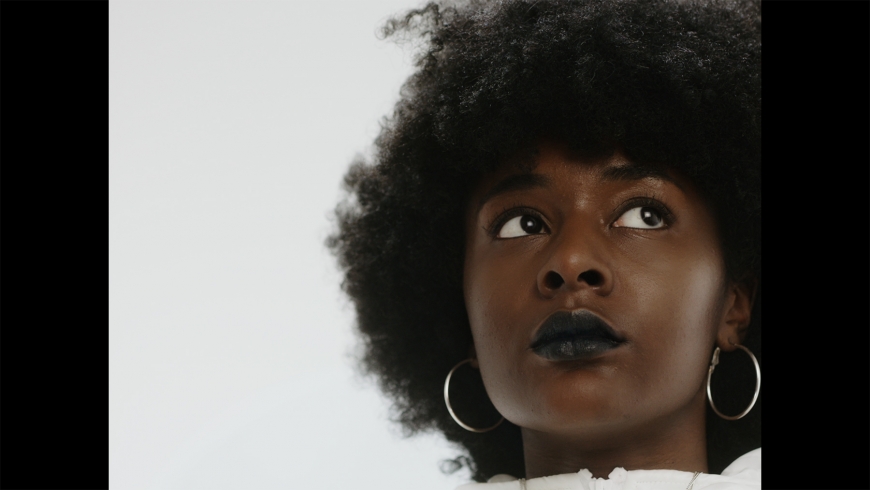 In the midst of a monochrome landscape the seeker journeys through noise, to find sound.

The film MASS, written and directed by myself was prompted by a series of conversations Cynthia Silveira and I had around the term Black Visual Frequency, coined by theorist Tina Campt.

The film speaks of multiple frequencies. It speaks of the coldness of a city, turning gaunt as you walk through, the displacement of a people cashed and carried beyond reference and meaning. It speaks of remembrance, remembering our home(s) resides within, not without. It speaks of communication, antennas, renewal, trinities and time.

It speaks of The Seeker (Davinya Cooper) finding home within herself and with her people. Those people are Man (Issa Sissoko), those people are Woman (Sinead Hunter). They are her, they are not her.

She is them. She is not them. The Seeker, attired in black and white wanders through the city, searching for refuge and meaning. It is not found in the luxury flats rising above her, it is found in herself. Through waves and frequencies, she reaches herself. Reaching beyond the confines of singular experience to a collective one. Transmitting and receiving. Receiving and transmitting. Finding refuge and meaning in us, our selves and those around us. To remember our worth, a wealth undefinable by price and stock.

The representation of Black Woman as The Seeker is no accident. She represents herself yes, the Black community, yes. She also speaks beyond her physical confines and embodies any and all oppressed persons seeking, delving deep and heeding the call to return within.

The Seeker enters the sanctuary to see herself. In seeing herself, she finds others. They are her, they are not her. They are Man, they are Woman. They commune, they are community, they are MASS.

MASS (2020) by Nadeem Din-Gabisi was commissioned for Frequencies, a curatorial project initiated by Cynthia Silveira. Commissioned and produced by Film and Video Umbrella (Producer Leah McGurk) as part of FVU's Curatorial Practice Award. FVU is supported by Arts Council England.