The monologue from Paul Rooney's Dust, as featured in his anthology 'Dust and Other Stories'. 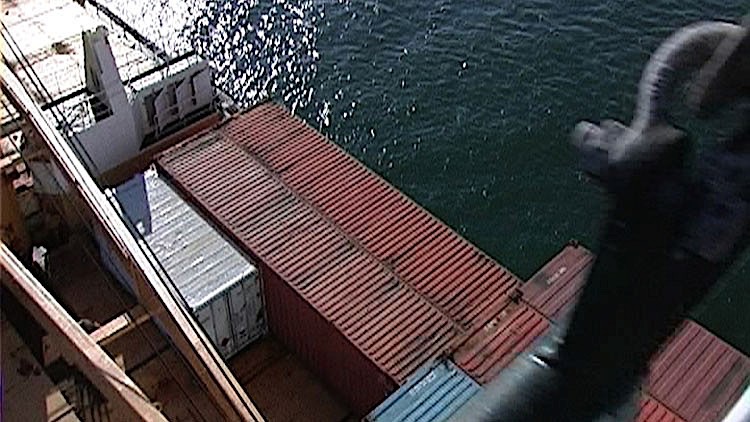 I am a hotel maid. I do the net curtains last when I clean a room, because I like to open, look out the window. I like to see. And it is calming as well, and I do forget that I’m in work, I just stand there. Staring.

At work today, staring out the window towards the sea, I was thinking of that pirate ship ride at Pleasureland that I had a go on last summer. After I got off it, I’m not being funny, I was wandering round the theme park all dizzy and queasy like a drunken sailor walking around the swaying deck, and then I puked up all my candy-floss over a fibre glass mermaid.

Another time, in the hotel bar, I was gazing out to sea again, and a guest asked me, “So, when’s your ship coming in?” I replied to him with a song, a song I wrote myself, about a mysterious old-fashioned pirate gunship that suddenly appears offshore, just like that warship that arrived in the bay, out of nowhere, during the great transport strike, it’s guns pointed at the city.

Anyway, my song tells of how I always stop for a moment when I’m cleaning a room and look out the window. This time I smile knowingly, because the dark ship I can see in the harbour, with its massive sails unfurled and its guns loaded, has come to bring my revenge, my pay-back, for all I have had to put up with. The city is then flattened by the ship’s cannons. Only my hotel’s left standing, with me inside it, staring out at the oranges and yellows of the burning city, until the smoke blackens the other side of the window I’ve just flippin’ cleaned. I have a good laugh at that. The ship in my song then vanishes with myself on board, and a cargo of refugees.

“There is a somewhat nervous disposition among the passengers…[but] Painful impressions on land disappear quickly at sea and soon seem merely like dreams.”

My song then tells of being adrift from the known world, on the floating dream of exile. Between one place, which gets more distant, and a new place that is unreachable.

What I always think is, you have to clean that last person out of the room for the next person coming in it. That’s how I see it. When I come in a room I just strip the bed off, take the rubbish out, then just basically start making the bed, dusting, polishing, hoovering. It’s hard work.

Windows tend to get splashed with the salt of the seawater, and they get rotten. It’s nasty, the windows go horrible. Certain rooms are right in the sun, so if the sun shines in, that creates dust. Some of the girls tend to put the light on and draw the curtains when they’re dusting, because the dust becomes more visible in the sun, you can see it in the air, looking for somewhere to settle.

The pirate ship in my song suddenly appears off the coast of an island, somewhere in the middle of a distant ocean. The vessel has changed its form, now it’s a modern freighter. It still has me and the refugees onboard, but we’ve also picked up some new refugees from a sinking fishing boat we came across. The authorities that rule the island don’t want any refugees on their land and don’t allow our ship to dock. The boat waits offshore for days and days, no country willing to take responsibility for the displaced people on the ship.

Which reminds me of another song, one my nan used to sing to me, not her favourite one about the seaside donkey who didn’t like his pancakes sweet, that was a good one, but the one about the hundreds of boats, years ago, that were rowed out to the end of a seaside pier, so that the lower-class people of the town could be close to the lights and sounds of the society ball going on there. My nan sang of how the laughter and music from the bright pavilion drifted over the water to the little boats, and of how the boats were almost invisible on the grey expanse of the sea.

TV pictures of the ship full of refugees, the ship in my own song I mean, are shot from helicopters flying above the vessel, and shown all around the world. When you look down  from above, the refugees are no more than dark little dots next to the containers on the open deck. There’re no interviews with them, no press conferences for them to state their case, and this time there are no cannons on their ship to aim at the watching world.

I open and look out the hotel window. I like to see. And I do forget that I’m in work, I stop for a moment, just stand there. Staring. It’s as if past events become present in that moment, like dust particles that we can see in the air only when the bright sunlight streams into the room.

With my imagination I have summoned the  ship in my song, and placed myself on it. I imagine walking round and round the deck high up on top of the bridge, looking out in the direction of the land behind the ship, and at the endless sea in front of it. The ship starts up its engines and heads back out to sea. I imagine the white foam as ship cuts through the waves in the bright morning sunlight. And I know full well, that the ship, and all that it contains, is unimaginable.