Out in the Open

Michael O'Pray Prize 2021: Sara Quattrocchi Febles explores how a film can no longer be fixed in time and place when screened outdoors. 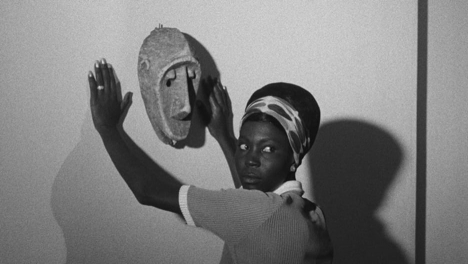 During my childhood, my parents would often take me to watch a film in one of the squares of Santa Cruz de Tenerife in the Canary Islands, our holiday spot in the summer. While my mornings were spent bathing at the idyllic beaches of the northern part of the island, in the evenings I would eat seafood on terraces and watch films outdoors. Sat with other children on the concrete floor of the public square, I would always wait impatiently for the films to begin. On many occasions, they were animated films that I had already seen, but what marked the difference between watching them at home and in a public setting was seeing the sun set behind the screen as the films began and listening to how the square’s surroundings became part of the film.

This past summer in the Sabatini Garden of Madrid’s Museo Reina Sofía I did not have the same feeling of impatience as I had during my childhood while waiting for a screening of Ousmane Sembène’s 1966 film La Noire de…. Instead, I was hesitant as I entered the museum, unaware of what to expect. I had visited the museum’s permanent collection and temporary exhibitions numerous times, but I had never been there for this reason – to watch a film outdoors.

Before Sembène’s film began, I started to question how I was meant to approach it – if it should be considered a work of art in the formal context of a museum or a film to be consumed informally outdoors. The one thing I was sure about was that a neutral viewing of the film was close to impossible, not least as Sembène’s film can be considered in dialogue with the museum’s history. The Reina Sofía houses one of the most extensive collections of western modern art in Spain, including many famous works such as Pablo Picasso’s Guernica, 1937, and Salvador Dalí’s The Great Masturbator, 1929. Screening a Senegalese film in a western cultural institution like the Reina Sofía provides spectators with new ways of reflecting on La Noire de…, even 55 years after its first release.

Winner of the Prix Jean Vigo at the 1966 Cannes Film Festival and directed by ‘father of African cinema’ Ousmane Sembène, La Noire de… follows young Diouana’s short-lived experience working for a French family. In Dakar, Diouana is hired to work as a governess for the children of the family, but, after they move to Antibes in southern France, they slowly drive her into servitude. The film is primarily set in the rooms of the family’s French apartment – the kitchen, the living room, the bathroom, Diouana’s bedroom – while the scenes set in the streets of Dakar are part of Diouana’s nostalgic memories. Sitting in a chair on the soft grass, with trees surrounding the screen and audience, I could feel how Sembène’s visual description of Diouana’s claustrophobic living environment becomes even more apparent in the open setting of the Reina Sofía’s garden.

The impersonal apartment, with its pristine walls and tiled floor, its lack of photographs and paintings, and its uniform 1960s-style furniture, bears no traces of the French family’s life. Sembène blends the apartment’s anonymity perfectly with Madame and Monsieur’s fashionably made silk dresses and casual suits. They represent an upper-middle-class European couple, unnamed cyphers with no real identity. Sembène pictures them as the projected ideal one might find in a western lifestyle magazine from the 1960s, and one which this screening’s white and largely affluent Spanish audience could still easily relate to.

When Madame tells Diouana to take her heels off as she should not ‘forget’ that she’s ‘a maid’, or tells her ‘we’re not in Africa’ when shaking Diouana to wake up, she ‘others’ her by wanting her to be fully submissive; as one of Madame’s friends says when Diouana serves her coffee, she’s ‘like an animal’. In this moment, I could imagine that other filmgoers were having similar thoughts to me: how often do we lean into maintaining destructive power dynamics that delineate the separation between ‘us’ and ‘them’? In a city where the migrant population is 15% of the total, and where political parties were using hate crime in electoral banners in 2021, the thought sent a shiver down my spine.

Even through the constant mistreatment, we never see Diouana physically react; her face remains expressionless and she is never shown directly speaking to the camera. The only way Sembène visualises her thoughts and opinions are through voice-overs, superimposed over scenes of her cleaning the dishes, wiping the floor, folding the laundry and cooking for guests. ‘The doors are shut day and night, night and day,’ she narrates, as we see her clean the bathroom floor. As we never see Diouana speak directly to the camera, we focus on her actions and her physical appearance. In some scenes Diouana seems deliberately out of place, wearing a fashionable silk dress with polka dots, low-heel shoes and a pearl necklace while wiping the walls of the bathroom or serving rice to Monsieur. Her unexpected outfit, resembling that of Madame’s 1960s garb, disrupts Diouana’s imposed uniform as a submissive African maid.

Diouana does not play into the stereotype of the ‘Mammy’, the US slave-era caricature which sought to prove that black people were content as slaves and servants (a figure that continued to be depicted in films such as Imitation of Life, 1934, and Gone with the Wind, 1939). Madame attempts to further make Diouana assimilate into the role of the black maid, marking the difference between them by making her wear an apron. Even though Diouana wears it without objection, Sembène externalises her defying thoughts: ‘Why this apron? I am no cook.’ By doing so, Sembène brings to the foreground questions regarding the position of maids: the monochromatic cotton outfits we are accustomed to seeing them wear are designed to render them invisible.

Yet the starkest contrast with the tended garden of the Reina Sofía came not from the apartment or even Diouana, but a mask that is seen silently spectating the scenes as they develop throughout the film. The mask first appears when Diouana arrives at the apartment in Antibes; it stands alone against the pristine white wall near the entrance. Sembène closes in on it, making us focus on its carved features that mark its large nose and small hollow eye sockets. When looking at it straight on, the carved mouth at the bottom of the mask is barely discernible, as if it is in silent observation of the events that take place in its surroundings, from Monsieur reading the newspaper to Madame commanding Diouana to ‘make rice with Mafé’. In one of Diouana’s flashbacks, we discover that she gifts the mask to the family as a sign of gratitude when they hire her in Dakar. When receiving the mask, Monsieur scrutinises it until he is sure that ‘it looks like the real thing’ and tries to find where to place it on the wall. Through a sequence of close-ups, Sembène reveals that the spaces on the walls are already filled with other masks, showing Madame and Monsieur’s vast collection of African objects. In Dakar, the mask blends with the other objects; in Antibes, it is hung alone on a white wall.

Watching the mask’s omniscient presence in the film felt almost ironic in the garden of the Reina Sofía, as inside I could easily find works by Picasso which appropriate the art of the African continent. But as the film progresses and the mask’s agency is revealed, the irony I felt slowly morphed into discomfort. When Diouana is no longer able to bear Madame’s true character, she takes the mask as an act of defiance, leaving an echo of its presence in a small hook fixed in the wall. Upon realising it has gone, Madame attempts to take the mask back from Diouana, and as they both try to hold onto the object, they begin to turn violently in circles. In this climactic scene, Sembène alternates close-up shots of Madame and Diouana as they spin. The rapid and hypnotic sequence shows Diouana in her only externalised act of defiance before she takes her life. Indeed, her insistence on keeping the mask becomes considerably more subversive after she kills herself, as she had no intention of taking it back to Dakar with her.

From Dakar to Antibes, the mask is represented as an interchangeable subject that travels across different countries and characters. In a conversation about the film held in New York’s Columbia Maison Française in 2018, Senegalese philosopher Souleymane Bachir Diagne perfectly described the mask’s fluidity from being a gift, used as a passive fetishised object, to one that transforms into an independent and mysterious object through Diouana’s agency. The mask’s transformation highlights Madame and Monsieur’s superficial and hypocritical appreciation of African culture. While they might enjoy consuming it, they make sure to position themselves at a distance from Diouana and maintain their position of power, potentially echoing the remnants of colonisation that persisted in Senegal, even after its independence from France in 1960.

Watching Sembène’s La Noire de… in 2021 makes us question how we appreciate African objects today, especially in the context of the Reina Sofía. The mask in the film is brought into dialogue with the objects of the museum, showing us how we appreciate cultures differently – perhaps the film’s intention all along.

Sara Quattrocchi Febles is the winner of the Film and Video Umbrella and Art Monthly Michael O’Pray Prize 2021.