Laura Jacobs on hostile environments, both social and natural, in Patrick Staff’s ‘On Venus’ exhibition. Winner of the Michael O'Pray Prize 2019. 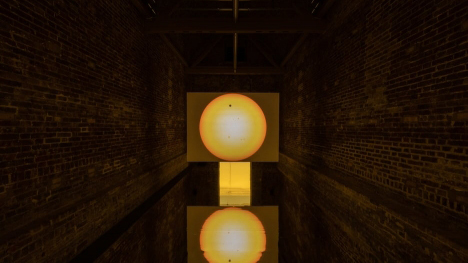 On 6 June 2012, Venus passed directly between the Sun and Earth in an astronomical phenomenon known as the ‘transit of Venus’. The alignment, which repeats just once every 243 years, is the last time the planet would be rendered visible against the solar disk of the Sun for centuries to come. It takes just a few hours for Venus to fleetingly pass over the sun’s surface and, however small or insignificant the planet looks in the face of the sun, it forms a celestial reminder of Venus’s similar size to Earth – indeed, the pair are often referred to as twins.

In Patrick Staff’s solo exhibition at London’s Serpentine Sackler Gallery, jarring, forceful and disorienting bursts of light punctuate the reading of a poem which strikingly ends Staff’s 13-minute single-channel video On Venus. A compilation of hyper-colourised, hyper-contrasted and scratched footage, the exhibition’s central work is focused on domesticated creatures bred to ultimately meet murderous hands. Awash with sickly neon tones of red, orange and pink, we witness the aggressions of a seemingly alien planet in which animals are transported to slaughterhouses and their bodies extracted from their skin and fur.

The poem suggests that life on Venus is framed by the tumultuous nature of the planet, volcanic and hellish, where a turn of the solar day lasts months. Life on this planet is where ‘… insects head underground / like dogs –tested on’, but it also mirrors our life on Earth, ‘on Venus, things are much the same as they are here’. Staff’s adoption of high-contrast thermal imaging makes this footage seem strange and distant enough for one to believe that these images originate from an alien planet. Areas of feigned heat and coolness through colour approximate the temperate reality we recognise on Earth. Through an immersive four-channel surround-sound system, the noise of industrial clinks, clanks and whirrs are mixed with the sounds of skin hitting against fur. As the looped video begins again, a moon-like sphere slowly crosses over the screen. This is Venus in transit, a planetary alignment that enables us to come face-to-face with Earth’s own hellishness and its hormone-pumped bovine nightmare.

Staff’s previous works call attention to state-led legislative punishments of trans bodies and transphobia, along with issues of chronic illness in Scaffold See Scaffold, 2013–14, Weed Killer, 2017, and queer intergenerational relationships in The Foundation, 2015, and The Prince of Homburg, 2019. Staff tends towards transgression in their moving-image works, breaking down boundaries – quite literally – by featuring blood, acid and substances which traverse the edges of the body; for instance, Weed Killer contemplated the way a transitioning body, regulated by hormones and chemicals, corresponded to one’s gender identity.

On Venus calls attention to the horrors on our own planet but also to its ephemerality. Just as Venus during this alignment is only visible for a few brief hours on Earth, the acid which drops from the ceiling creates imprints on the metal barrel below, erosions that visibly mark our time viewing the work. Days or weeks later, the imprint on the metal has disappeared or perceptibly changed.

A material similarity is found in the work On Living, a neighbouring collection of thin steel plates which are etched with news stories surveying a particularly damaging series of articles published by various British tabloids in 2018. The reports claimed that the convicted child murderer Ian Huntley sought to dress in women’s clothes and identified as transgender. The newspapers assumed that this was a ruse by Huntley to enter a women’s prison. Months later, the articles were exposed as entirely fabricated. Staff arranges these plates in multiples and in order of publication date, revealing that the Sun and its competitors, which also published the falsified story, later deleted all online evidence of their false reports.

From the early 2000s and the integration of the internet, access to information as full, complete and accessible at any time has slowly become assumed. Politically minded artists since the turn of the millennium have rooted their works in surveillance and information culture in order to investigate what this kind of access means for the human experience. Nearly 20 years on, our relationship with technology is a given. In our age of seemingly easily accessible information we are increasingly faced with false stories, while methods of information distribution come under political or state control. Staff engages in these complexities and how they interrelate with public reception of queer and trans identities.

Political representation of the marginalised stands front and centre throughout Staff’s exhibition, calling attention to how information is distributed to reveal otherwise coded state-led and societal powers, and question its capacity to effect change. Rooted in Hito Steyerl’s theories around the ‘vicious cycles of audiovisual capitalism’, the mixed low-resolution footage of animal cruelty, further distorted through its layered and coloured effects, and having clearly been distributed, downloaded, uploaded and re-downloaded again, traces the innate sharing of materials as political sites of access. Staff’s film feels defiant when compared with the often protected forms of media distribution and other privileged information networks.

Staff examines these histories of the marginalised to witness how they are fictionalised, rewritten and deleted. The form matches the radical and turbulent nature of the content – rejecting capitalism, institution and production. But as the film reminds us: ‘On Venus, things are much the same as they are here.’

Patrick Staff’s exhibition On Venus was at the Serpentine Sackler Gallery in London from 8 November 2019 to 9 February 2020.

Laura Jacobs is winner of the Film and Video Umbrella and Art Monthly Michael O’Pray Prize 2019.