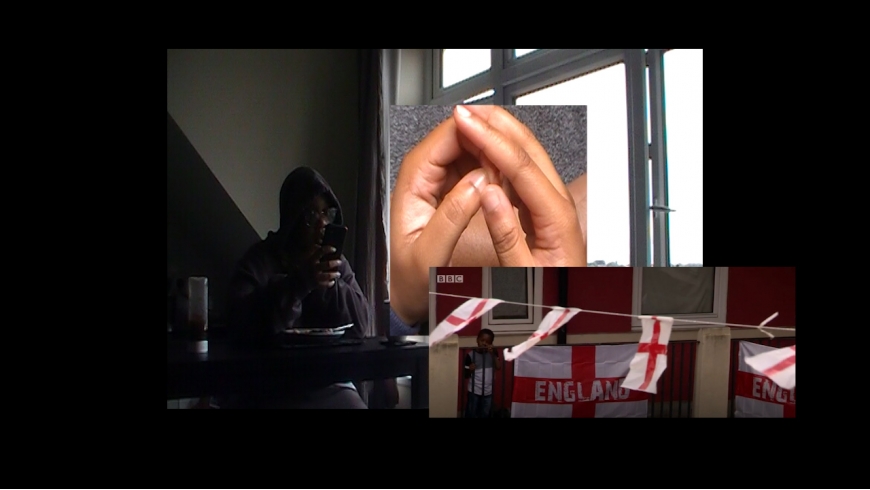 Great-ish: The Gaslighting of a Nation is exhibiting as part of the The Soft Prison at Museum of the Home. The exhibition brings together works by ten contemporary artists to explore the landscape of our private space and the home's capacity to contain and sustain us.

Great Britain has long had an extravagantly high opinion of itself – look no further than its choice of name, with all the swagger and hauteur it implies. Great ambitions fuel great expectations, but as its aura of grandeur starts to fade, it’s not uncommon for a nation to big itself up again at the expense of others, whether they be outside or inside its borders, De’Anne Crooks’ Great-ish: The Gaslighting of a Nation is a stark, impassioned inventory of just how far Britannia falls short in its numerous claims and pretensions, particularly towards its marginalised, minority communities. Held together by a poetic monologue that draws inspiration from Toni Morrison, Hilton Als and Danez Smith, and performed against a backdrop of domestic scenes (all familiar from the time of lockdown, but with a low-tech feel that evokes a nostalgia for an earlier, happier time), Crooks’ 10-minute video gains even greater poignancy by taking the form of a love letter to the artist’s unborn child, warning them about the struggles that lie ahead, preparing them for the dilemmas they are certain to face. Prominent among these, as the video’s subtitle, the gaslighting of a nation, suggests, is the insidious pressure that will be brought to bear to convince Black Britons that the racism and discrimination they regularly encounter is more a facet of their mind rather than the habitual expression of the structures of white supremacy underlying the apparently liberal and munificient state. Comparing these patterns of brainwashing and coercion to the various stages of a toxic relationship with a manipulative spouse, Crooks calls out a uniquely British flair for duplicity, disinformation and distortion. Combining a heartfelt tenderness with a hard-won knowledge that only comes from bitter experience, Great-ish is a vivid reminder, if any reminders were ever needed, of how a hopeful future cannot come into being until Britain confronts the legacies of its past.

Museum of the Home

The Museum is accessible for prams and buggies. There are some larger lockers at the reception area for buggies and a buggy park (not locked) at the far end of the Home Galleries.

There are baby changing facilities in each of the accessible toilets across the Museum (there are four of these).

Parents and guardians are welcome to breastfeed or bottle-feed anywhere on the Museum's grounds.

The Reading Lounge offers comfortable seating and the Garden Reading Room is a little off the main route and is often much quieter.

Blue Badge holders may park in bays on Kingsland Road (up to 3 hours, 10am–4pm). The bays are alongside the central Museum gates. There is ramped access into the gardens from the north and south gates.

There are four accessible toilets, two are on the lower ground floor and two on the ground floor.

There are gender-neutral toilets at the far end of the Home Galleries.

There are single-sex toilets off the reception area.

Guide, assistant and companion animals – including assistant dogs in training – are welcome at the Museum, as long as they're working and are wearing their tabards/harness.

The main entrance is opposite Hoxton Station (on Geffrye Street), it is accessible via ramp and steps. The exit onto Kingsland Road is ramped from the north and south gates.

There are lifts at both ends of the almshouse building.

There are backless benches in the reception area and galleries. There are sofas in the Reading Lounge. We have some lightweight folding stools for visitors to borrow, located at either end of the galleries on both floors.

All films are subtitled and the 12 minute film Shelf Life in the Home Galleries has BSL interpretation.

We have induction loops at the Information Desk, in the Learning Pavilion, Studio and Collections Library. Also in the Georgian Room and Art Rooms.

There are large print guides at the entrance of every gallery space. These are also available to download on the web pages for each space.