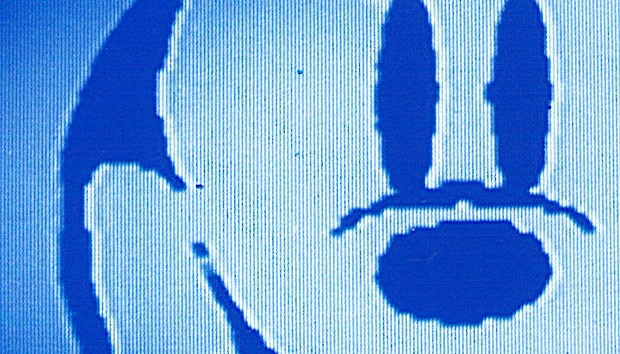 During 1992, Moira Sweeney decided to leave Film and Video Umbrella to pursue her development of the first Manchester International Film Forum, which eventually took place at Cornerhouse in the spring of 1993. Following her departure, Steven Bode became de facto Director of a newly configured organisation, whose recent loss of regular financial support from the British Film Institute was redressed by a re-confirmed commitment from the Arts Council. Relocating from Lots Road in Chelsea to Orde Hall Street in Clerkenwell, the new-look Film and Video Umbrella (in which Steven Bode was assisted by Emily Grant, and later, Mike Jones) took the opportunity to signal a change of direction, extending its artistic focus to encompass examples of creative innovation opened up by advances in digital technology,

The first in an ongoing series of FVU showcases of international computer animation was an instructive example of this. Computer World was a two-programme compendium of thirty short pieces that mapped this emerging visual landscape, highlighting how computer technology had aided and expanded artistic experimentation while opening up new horizons generated from within the spheres of scientific visualisation and simulation. The list of artists included a number of stellar names such as Marc Caro, Tamas Waliczky, Simon Biggs, William Latham and Karl Sims. The programme’s accent on new and accessible forms of animation was echoed by Animation with Attitude: a selection of offbeat ‘new wave’ animators that had cut their teeth on MTV’s cult series Liquid Television.

At the Edge of the World also looked towards America – a kind of mythic, speculative, science-fiction America: a place of edge-of-sight hallucination and end-of-the-world revelation. An amalgam of cult, fringe Americana and despatches from the ‘new frontier’ of cyberspace and computer technology, the programme pivoted on ambitious feature-length works by David Blair and Craig Baldwin. These twin leads, Wax (or the Discovery of Television Among the Bees), by Blair, and Tribulation 99 (Alien Anomalies Under America), by Baldwin, were supplemented by short found-footage films by Bruce Conner (a clear source of inspiration for Baldwin) and by new video works by Shelly Silver among others.

The other two programmes this year considered video’s place within the visual arts, and its myriad links to the arena of performance. In recognition of Bill Viola’s increasing ascent with the contemporary art world, his latest piece, The Passing, acted as the linchpin of the programme Seeing in the Dark, as part of a double-header with a new long-form work by Breda Beban and Hrvoje Horvatic, The Left Hand Should Know.

Beban & Horvatic also featured in three-programme survey of video, performance and music, entitled To Camera. Under the sub-headings of Light, Action and Sound, the package was a three-act exploration of how the act of performing for the camera could be captured and extended through the medium of video. Selected by Jeremy Welsh and Steven Bode, To Camera featured two-dozen recent works, ranging from raw, durational, demandingly physical performance art to pop-promo video, and drawn from a diverse roster of talents, numbering Christian Marclay, Marina Abramovic, Peter Campus, Ulrike Rosenbach, David Byrne, Vito Acconci, Akiko Hada, John Maybury and Mona Hatoum amongst others.