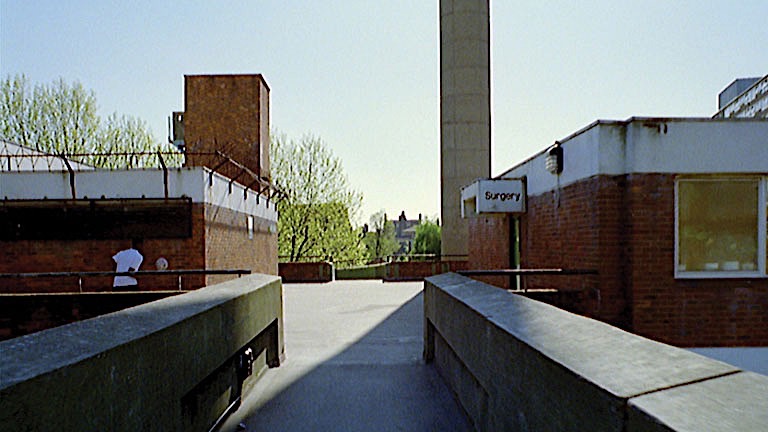 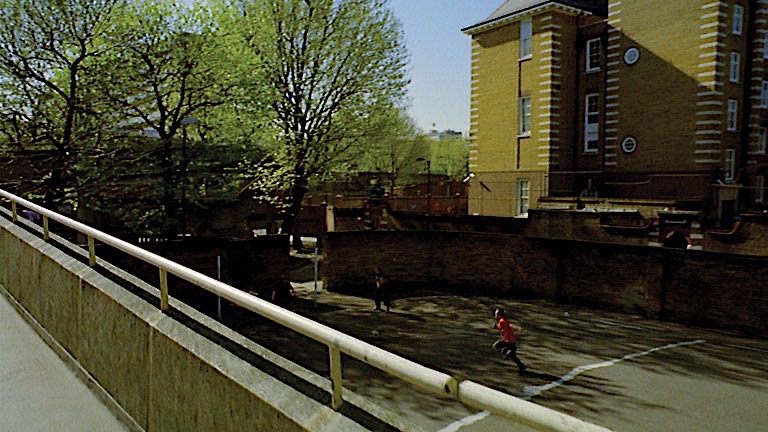 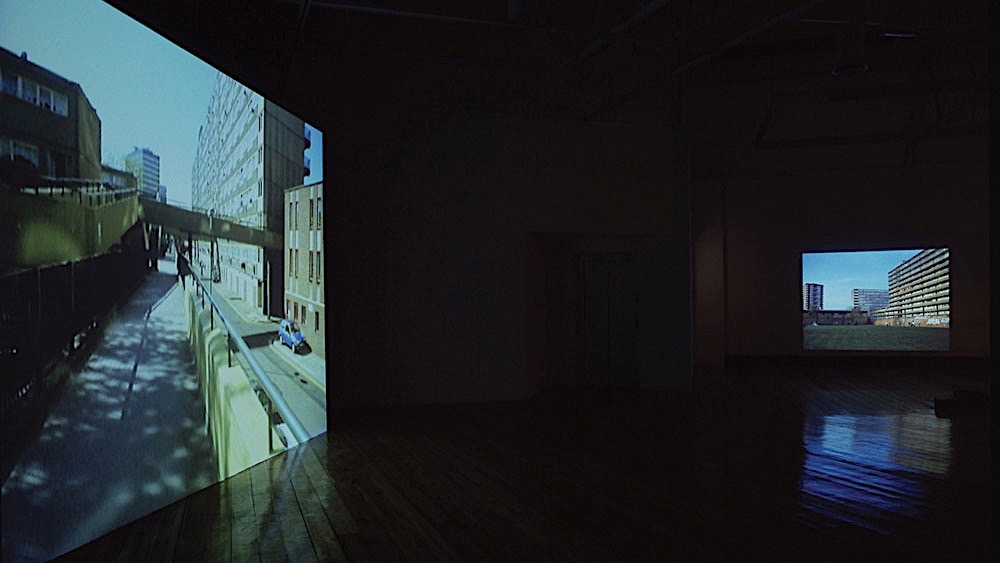 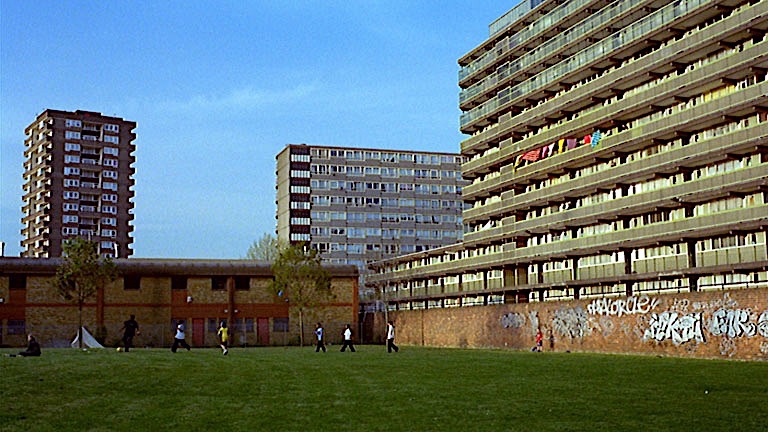 These two single-screen film-works by the British-based, Canadian-born artist Mark Lewis were co-commissioned by Film and Video Umbrella and Cornerhouse for the group show Spectator Sport at the Cornerhouse Gallery in Manchester (11 May to 23 June). The works then toured independently to Rooseum in Malmö, Sweden and to the Centre de Arte de Salamanca, Spain.

Children’s Games, Heygate Estate takes the form of an uninterrupted travelling shot, 7 minutes and 21 seconds in length, in which the camera moves along the above-ground walkway that runs throughout the estate. Weaving between stairwells and tight corners, the camera swoops along the walkway. The modernist architectural features of the tower blocks and ‘rationally planned’ spaces dominate the frame but, at the periphery of vision, small human actions take place. Children of many nationalities, reflecting the diverse cultural make-up of the Estate, play a variety of games. Whether cycling or flying kites, tumbling or playing football, the children fill the marginal spaces of the brutalist architecture with lively activity. Inspired in part by Brueghel’s painting Children’s Games (1560), Children’s Games, Heygate Estate might also be seen as an exploration of the modernist architect Aldo van Eyck’s famous dictum that “‘space’ in the image of man is ‘place’”.

In contrast, the twin work of the pair, Tenement Yard, Heygate Estate is a scrupulously composed static shot of four minutes which depicts a casual game of football played by local children on a patch of common land presided over by the looming backdrop of housing blocks. Small details are significant here too, just as they are in Children’s Games, Heygate Estate: a flurry of graffiti ‘tags’ decorate a long, low wall; a tent occupies an enigmatic place on the makeshift football pitch; clothes hanging out to dry add colour to the monochromatic exterior of the housing blocks and a mattress makes a seemingly autonomous journey along the balcony of the block. Inspired equally by the failed architectural utopianism of the Heygate Estate as well as the resourcefulness of the local children, Tenement Yard, Heygate Estate also calls on work by the 19th century German Romantic painter, Adolph Menzel.

A Film and Video Umbrella/Cornerhouse  co-commission in association with Centro de Arte de Salamanca and Rooseum.

The archived version of the ‘Imitation of Life’ website has been rebuilt in order to contextualise the project and make the site self-contained. At the time of production, there were links to external sites and reliance on third party software which may no longer exist. Any biographical details are as they appeared on the site at the time. 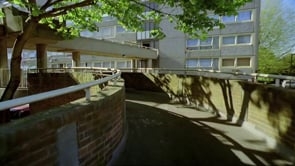 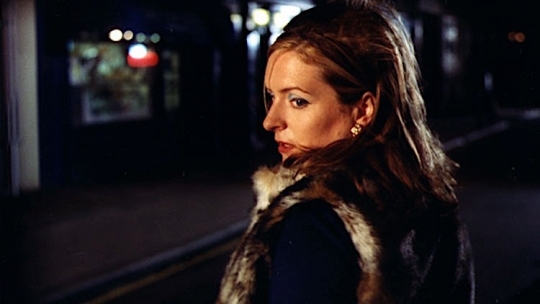 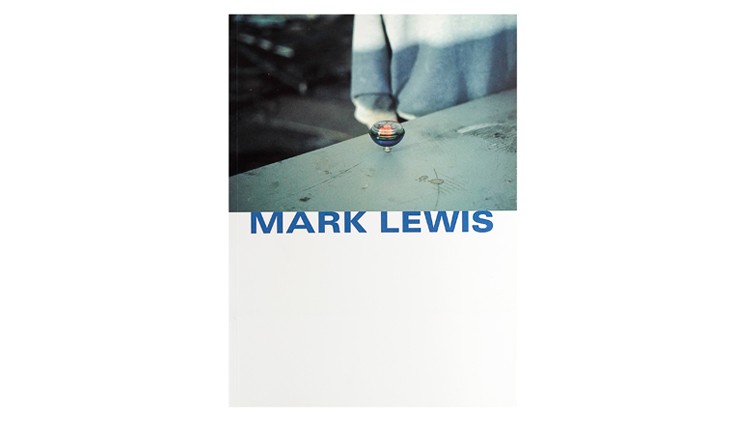 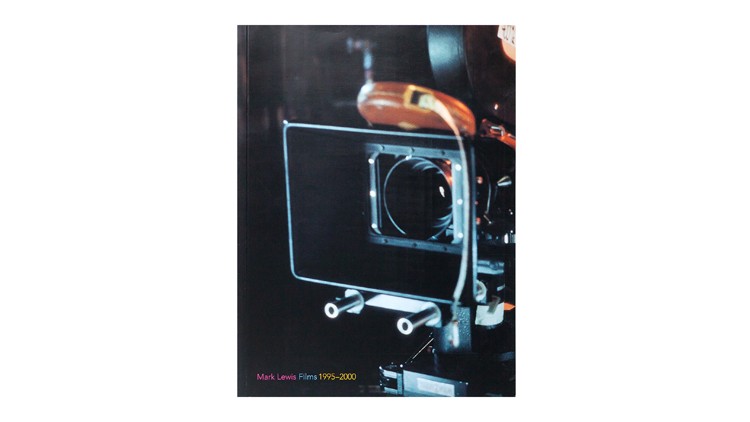