A voice comes to one in the dark

Brian Dillon examines themes of the past, present and future in Patrick Hough's The Black River of Herself.  View the storyboard-illustrated PDF of this text here. 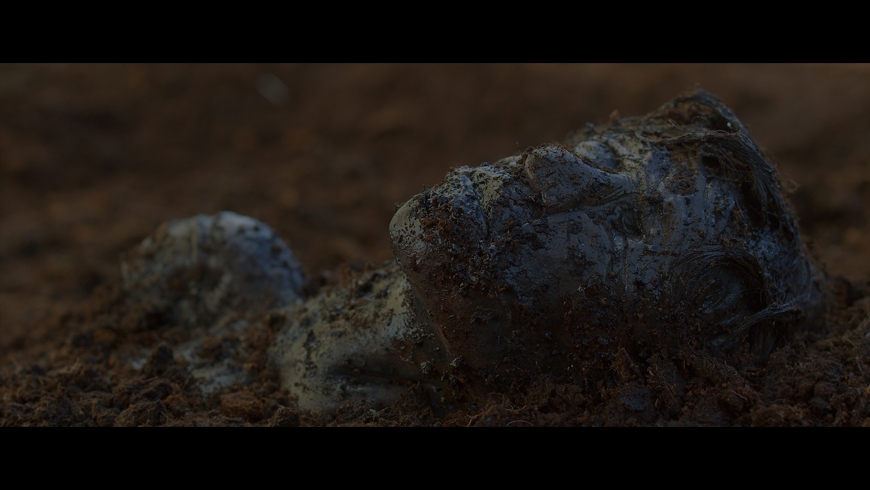 ‘When the general pyre was out, and the last valediction over, men took a lasting adieu of their interred friends, little expecting the curiosity of future ages should comment upon their ashes; and, having no old experience of the duration of their relicks, held no opinion of such after-considerations. But who knows the fate of his bones, or how often he is to be buried?’

On the 4th of June 1954, the BBC television programme Buried Treasure devoted its forty minutes of tweedy but lightweight pop archaeology to Tolland Man: a naturally mummified corpse discovered four years earlier on the Jutland peninsula, Denmark. The body, says the show’s regular co-host (and professor at the Institute of Archaeology) Mortimer Wheeler, is ‘the most haunting relic of antiquity I have ever seen’. Tollund Man himself is of course not present in the studio, but rather seen in film footage where the hands gesturing and pointing at his blackened features are clearly not Wheeler’s or those of co-presenter Glyn Daniel. A certain intimacy is missing. The programme tries to supply it by employing a third presenter (the Irish actor Noelle Middleton) to introduce an Iron Age fashion show, and to cook for Wheeler and Daniel a gruel based on seeds and grains found in Tollund Man’s stomach. These included barley, flax, black bindweed, fat hen, hemp-nettle and field pansy. Also, a small quantity of sand – alien particles.

For all its stilted in-studio distractions, ‘The Peat Bog Murder Mystery’, as the Buried Treasure episode is called, cannot help being entrancing at times. Closeups of Tolland Man’s face show us the dark leather sheen of his skin, the texture of a day’s beard growth, the sheepskin cap beneath which his hair is visible, a noose of plaited hide around his neck. There are photographs of the corpse as first found: its foetal position, facial expression as if sunk in concentration, the mass of flattened folds and wrinkles that the body and its garments have become while pressed under (at the time of discovery) eight feet of peat. What Daniels’s voiceover does not tell us is that the head of Tollund Man had in 1950 been removed for full preservation, but the rest of the body allowed to desiccate and decay – this was all the science and technology of the time could achieve. (The present display at Museum Silkeborg in Denmark is made up of the original head attached to a replica body.) But the fact of his postmortem decapitation by Danish archaeologists accounts for the most compelling sequence in the BBC programme: a shot of the upright head revolving before the camera, giving us Tollund Man in the round, even if his interior (excepting his last meal) remains mysterious.

‘Not here again. Not air again. Lying between things.’ Among the most obvious things one could say about the spectrally articulate bog body in Patrick Hough’s film The Black River of Herself is that she – or should we say ‘it’, like the television archaeologists of 1954? – is still lying down. Hers is, or has been, a flat world made of planes and strata, out of which now she finds herself translated once more into three dimensions, and at the same time somehow reduced by the machines trained upon her – ‘touched by their pristine technology’. Viewed from a distance, the bogland in which she has long been immured is an arrangement mostly of horizontals, except that below the horizon a tracery of gleaming liquid lines attests to the vertical invasion of this landscape, its slicing into wet portions of fuel or fertilizer. The digging reveals horizontal strata in the peat; but the image, or Hough’s camera, slowly turns at one point so that these veins or seams run vertically. So much in The Black River of Herself will turn out to depend on angle and attitude: surface and depth, past and future – these are not stable categories, in the soft and fluid realm the film explores.

The most ancient bog bodies found in Denmark date from 8000 BC, the oldest in Ireland (excepting those reduced to skeletons) around 2000 BC. Too easy to imagine that they are the remains or residue of various fixed moments in time, simply awaiting rediscovery so that they can speed us back into the past. In truth, they have always been mobile, always drifting or revolving (like Tollund Man on TV in 1954) and looking in different temporal directions at once. Bodies found in Ireland, such as Old Croghan Man (2003) or Cashel Man (2011), seem to have been sacrificed and then buried at the boundaries of kingdoms or tribal lands. They are not merely interred and consigned to the past, but sent as emissaries to the future: their deaths are meant to ensure fine weather, a good harvest, continued or renewed prosperity. This is what the bog body in Hough’s film means when she says to the archaeologist sent to study her that she has been ‘sacrificed the first time for the sake of the future, the second time for the sake of the past.’

The last meal, the ligatures, devotional or personal items discovered alongside bog bodies: these are technologies of time travel. By contrast, Hough’s minimally animated figure arrives without ritual trappings or signifying arrangements of her body; instead she is all flesh, and then voice, or some ghostly version of voice, thought, spirit, boggy emanation. ‘Sour water on the lungs.’ She comes wheezing out of the earth, reluctant, ironical, longing to be left alone. Barely there, a head and partial torso, a hand twitching nearby; but the camera reveals an intimate immensity in her soft woody skin, the movement behind an eyelid, the extreme delicacy of a spider’s tread as it crosses her forehead. Among the questions asks: what kind of attention can understand or do justice to such an extraordinary visitor? Looking, listening, touching with care the kind of matter that might be body and might be bog: all of this is a mode of respect for the alien being – but experienced by her as yet another violence to her person. There is a sense of infinite fatigue.

The bog body is voiced by Lisa Dwan, best known for her exacting, magical, horrifying performances of certain plays by Samuel Beckett: Not I, Footfalls, Rockaby. Her presence is just one instance of a Beckettian atmosphere in Hough’s film. What else? A feeling that this voice is tiring itself out, unable to stop the flow of its suddenly exposed thoughts, emotions, physical sensations. A sense that it – no, she – would like to remain in situ, reverting to ‘pristine airlessness’, to darkness and silence: ‘I’m not ready to leave.’ Most of all, a feeling that her supine attitude, her horizontality, her face turned towards earth above and now sky, that this is in itself a way of being, both torment and comfort. It’s the predicament of so many of Beckett’s narrators, as in his short prose work Company (1979): ‘A voice comes to one in the dark. Imagine. To one on his back in the dark. This he can tell by the pressure on his hind parts and by how the dark changes when he shuts his eyes and again when he opens them again. Only a small part of what is said can be verified. As for example when he hears, You are on your back in the dark.’

On her back but no longer entombed, the bog body is exposed to the scrutiny of a reluctant or rueful archaeologist, and to the rigours of his technology. ‘Who’s your three-legged friend?’ she asks, referring to the tripod above which a 3D laser scanner regards her with its alien eye, turning her unruly physicality (‘I don’t feel so organized, behind the ribs – mush’) into a stream of information. Is this what looking is reduced to? No wonder she wishes to turn the archaeologist’s scrutiny against him, reverse their positions, become the seer to his seen. For she is about to be transported to another site of inspection: her fragmenting body pushed through the aperture of a CT scanner – ‘examining me limb from limb’. Except that the reduction to data will not quite eradicate her strangeness, her teeming organic materiality, all the other underground life that she brings with her into the laboratory. The place ‘crawls with infinitesimal lifeforms’.

Where are these lifeforms, the bodies (alive or dead) and landscapes that support them, heading? In some ways, The Black River of Herself is not about the presence of the past at all, but concerned with the future – quite possibly a future without human bodies, in which specimens like the bog-bound woman will be all that remain. ‘The atmosphere has changed though – tastes like a funeral.’ Hough’s approach, and that of Daisy Hildyard’s script, is to posit everything – bodies alive and dead, landscapes busy with plants and insects, coral reefs threatened with desiccation and death, the air itself and ultimately the planet – as particles in an atmosphere that is at once life-support, poison and a kind of archive. What is the cloud of spores or motes that the garrulous bog body blows in the face of her captive archaeologist? A taste of the deep past or an emission from our uncertain future?

‘We all inherit their ancestry. The mitochondria relate us to the chloroplasts, as the plants relate us to the peat, the peat relates us to the fire, the fire to the ash, the ash to the clouds, and the clouds to the runoff. Everything takes flight from there.’ The ruminating bog body speaks these words over Hough’s startling footage of the island of Skellig Michael, off the coast of County Kerry: towering sawtooth cliffs above the sea. He was inspired in part by a sequence at the end of Werner Herzog’s 1976 film Heart of Glass, a fable of collective madness following a kind of environmental and cultural collapse. Seven years earlier, Skellig Michael had featured in the BBC’s celebrated series Civilisation, where the island’s early-Christian monastery is described by Kenneth Clark as a frail vestige and redoubt of culture, hidden away from marauding barbarians. In The Black River of Herself, no such clichés are possible, there is no real division between past, present and future; between primitive subject and civilised researcher. Or between body and land, mind and atmosphere – it is all one, equally imperilled.

Brian Dillon’s books include Suppose a Sentence, Essayism, Tormented Hope and In the Dark Room. He has curated exhibitions for Tate Britain and Hayward Touring, and his writing has appeared in such publications as Artforum, frieze, The New Yorker, The New York Review of Books, the Guardian and London Review of Books. He is Professor of Creative Writing at Queen Mary University of London. Affinities, a book about images, will be published in 2022.