from a distance, you can make of the water what you will

Poet Zein Sa’dedin considers the complex emotions of homecoming and departure through the prism of Zineb Sedira’s Saphir. 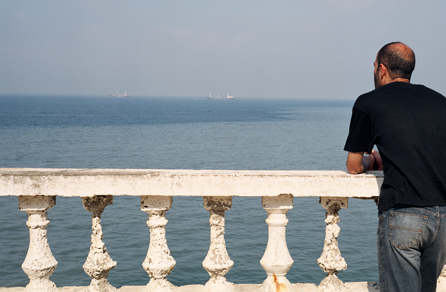 as the plane descends down to the queen alia international airport, amman unfurls around me like dark water, an embrace almost too warm for welcome.

in truth, i need amman more than it needs me. it knows this. despite my best efforts, i circle it, tied. the city both my buoy and wind. it, on the other hand, tolerates me at most. is this all i can ever ask of it? i’ve left in search of other waters.

i watch ‘saphir’ for the first time having returned from a recent visit. sleeplessly, i watched the world from the window of my teenage bedroom, in the city i do not live in anymore, the one i return to only to return. all i am is what it has made me.

it is a city i love because i leave.

the refractory yearn to return only when one has left.

we are moulded from the mouths of the cities we speak of.

and in their wake, a sunstorm.

in ‘saphir,’ two screens and two focal points, two protagonists lead us around the port of algiers. although to lead is to do so with intention. more accurately, the protagonists wander, linger, they gaze and they stroll. moving restlessly. always in proximity but rarely together. paths that cross never to conclude.

the woman, older, lives and roams in the safir hotel. the man, younger, walks the streets of the town below.

like the tide, they ebb and flow. the woman, to gaze out her balcony and back indoors. the man, to gaze at the sea and back to the streets.

we, of course, their observers.

the safir hotel haunts the city with its colonial shadow. the woman, as if a spectre, walks its languishing halls in a printed skirt, steps out only as far as its balconies. she gazes at the sea. she withdraws. she does not leave, firmly rooted in the grandeur of its memory - what the hotel once was, colonial splendour.

in amman too, previously occupied by the british, we know these people well.

the decline of colonialism, as white history describes it, left many of its local indigenous allies scrambling. many assumed power in other forms, many emigrated, and many, like this woman, retreated into a deeply set self-enclosure. a denial that requires regular maintenance, a constant turning away from reality, a bubble so precarious that a glance in the wrong direction would pierce it indefinitely. a punctum forever on the verge of rupture.

perhaps that’s why she seems to gaze only at the sea. from a distance, you can make of the water what you will.

elsewhere in the world, i described balconies as aches that protrude over a city.

for women especially, balconies are often a double-edged sword. traditionally, men leave to occupy the streets, the shops, the offices, etc. women are left to the world within their domesticated walls. balconies, it must be said, offer a reprieve. a taste of the city’s sounds, its breeze, its flux. a reminder that more exists, a flowing of the outward inward and vice versa. however, they also serve as a reminder for many that this is as far as they are able to go. an extension of their confine but a confine nonetheless.

for the woman in ‘saphir,’ this seems both true and untrue. as a daughter of european settlers who’ve since left algiers, her withdrawal to the safety and familiarity of the safir hotel is self-imposed. she is master of her own movement and acts only accordingly. while the balcony provides an opportunity to connect with the reality of the world below, she seems to refuse it. she keeps her gaze firmly outward, not downward. always towards an elsewhere in her imagination that poses no risk. perched from within a past that no longer exists.

in a few instances, the man and woman are in spitting distance. the two screens let us be the witness to their parallel lives. in one such occurrence, we see the silhouette of the woman, backlit, as she gazes out of a curtained window. in the other screen, the man, face detailed in sunlight, gazes beyond the camera with his back to the hotel. behind him, the same windows. what’s on their other side is opaquely obscured, unseen.

the film opens with the man’s direct gaze. we see the camera pan slowly across his eyes as he stares directly at us. the stare unwelcomes us. he confronts us, the voyeurs, the viewers of the film. simultaneously, the other frame is of the sea as if he stares through us to the ostensible object of his desire - an elsewhere beyond the horizon.

throughout the film, we watch the man as he watches, wanders, wonders, returns to watching the sea and the daily ferry as it approaches port. he never gets on, doesn’t even try. a ritual of stagnant observance. a dream of the unreachable beyond. how many in the global south know this all too well. how many yearn to leave only to return.

a city changes once you leave. its glow, its transfixion.

i’ve dreamt of leaving amman for lifetimes. in fact, i’ve been bred for it. for as long as my memory allows, i have been told, instructed actually, to leave amman at the first opportunity, to find other staircases to climb, other streets to roam. family, loved ones, teachers, and strangers, all looking to leave the sandstone and its ruins behind.

a city is only as good as its self-belief. and when that crumbles, all hope is lost.

i’m one of the lucky few. i know this deeply.

now that i have left amman, i return with confliction, with fear so nauseating it consumes me until i arrive back on its soil. once there, it is like i never left. this terrifies me of course. the life i’ve begun to build elsewhere vanishes like the flame of a candle you blow out in secret. the smoke lingers until it doesn’t.

yes, some parts of the city are unrecognisable, but even the backs of my hands have bruises i don’t remember. i sit on balconies and the city's aches spread out below me like a fine, well-worn rug. i know i will leave so i can afford to romanticise. i romanticise to have something to return to.  otherwise… well.

the word ‘saphir’ haunts. french for ‘sapphire,’ a vast blue unrolls with the tongue. the language complicates.

i read somewhere that sapphire mines in madagascar are being reclaimed by locals, having suffered under artisanal mining for decades with a detrimental impact on the environment. the land is being reforested, returned to its origin. this is more than metaphor to me. this is praxis.

in arabic, the language i inhabit deeply, fluently, the meaning differs. in arabic, a ‘saphir’ is an ambassador. a representation of one place elsewhere. arabic, too, complicates.

though i’ve left my city for another, i refuse its claim. i am ambassador of nothing. no. not even myself.

mists of blue memory cloud my screen. the camera pans.

all cities are what we make of them. an evanescent tide.

Zein Sa’dedin is a poet and founding editor-in-chief of BAHR // بحر. Her debut pamphlet ‘Staircase’ is out now with ignitionpress. She can be found on Instagram @zeinsadedin.