Writer Jo Thompson explores Rachel Maclean's Feed Me within the context of surveillance capitalism, highlighting traces of the fairytale narrative in our online behaviours. 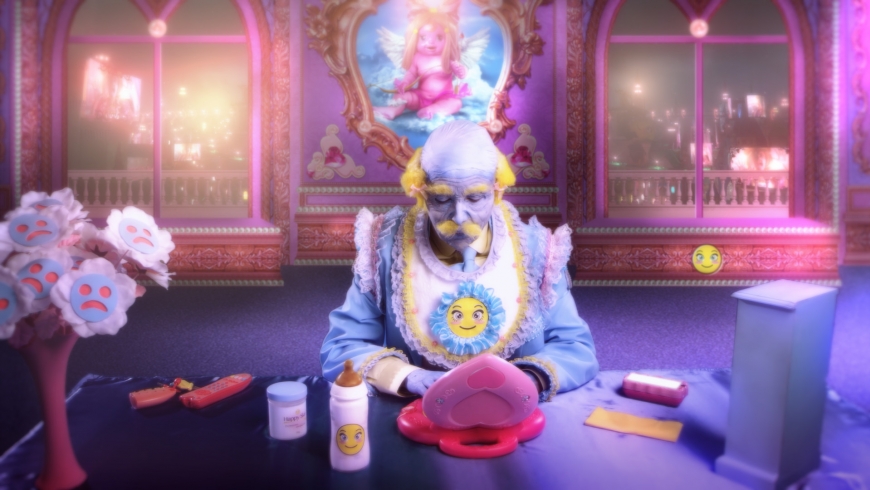 I’m increasingly convinced that my phone is listening to me. I say that not as a sort of gimmicky intro, but as a sincere reaction to the number of occasions in which it feeds me adverts for things I just said aloud. Most people probably feel the same way; the more dependent we become on tech the more paranoid we’re all becoming about it. How many of us are sitting at this very moment with tape over our webcams? Most of us have spent more time aware of being watched than normal since the pandemic began, sitting for hours a day on video calls where peers and managers can see not just our faces but a sliver of the realities of our home lives too. Some companies have even mandated that their employees spend all day on camera, literally surveilling them to ensure they are deskside for all of their working hours. For those of us who live in cities though, this sense of a change is mostly false – the UK has more CCTV cameras per person than any other European country. In pre-Covid times, Londoners were captured by an average of 300 cameras a day. So, it feels perfectly natural that so many scenes in Rachel Maclean’s Feed Me are filtered through the grainy lens of a watchful CCTV camera. There is nowhere safe from prying eyes, home or away.

Feed Me is a twisted sort of tale that is as grotesque and morbid as the best fairytales always were. So many of our old folk stories culminate in children taking their revenge on predatory grownups - see Hansel and Gretel incinerating that wicked old witch without hesitation - that it’s surprising we let children read them at all. Fairytales, like horror, deal with our anxieties over boundaries and control: the city and the wilderness, the innocent and the evil, the child and the man. We’re told that the villain of Little Red Riding Hood is the wolf, but its biggest fears are about children leaving the realm of the home, and women venturing beyond the boundaries (and watchful eyes) of society. Barbara Creed’s theory of the Monstrous Feminine [1] points to culture’s recurring desire to narrativise women as victims in horror films, and fairy tales often do just the same.

When we read or hear fairytales, more often than not we inhabit the leering perspective of the villain: we stalk Little Red Riding Hood as she traipses through the woods just as the Big Bad Wolf would. Feed Me thinks a lot about watching and being watched, and, in an age of surveillance capitalism [2], makes explicit our fears about technology and the multiplying ways we are monitored. We look expectantly over the shoulder of a young Lolita as she hides from Granny to chat with an anonymous stranger on a ‘dangerous websIt’, making naive plans to meet up even though they seem ‘2 Good 2 be true!’ The Beast character manipulates the incomprehensible text-speak of the young girl’s peers to entice her into trusting him, dropping ambiguous breadcrumbs that encourage her to sneak out of Granny’s flat.

A lot of fears around what children and teens get up to online really come from a place of frustration – young people inhabit idiomatic worlds so completely outside of most adults’ frames of reference that they start to look like darkened, dangerous woods. Maclean has spoken of a fascination with a ‘childhood of the mind’ as represented in the carefully manicured bounds of utopic children’s programmes, which she inverts in a film that depicts an almost barren urban wilderness; a visual mirror to the Badlands of an internet that is always expanding and often toxic. The chatroom scene plays out under the cutesy eyes of an emoji-like free gift the Little Girl has brought over: it is awake and watching, sending a livestream to its rapacious creators at Smile Inc. 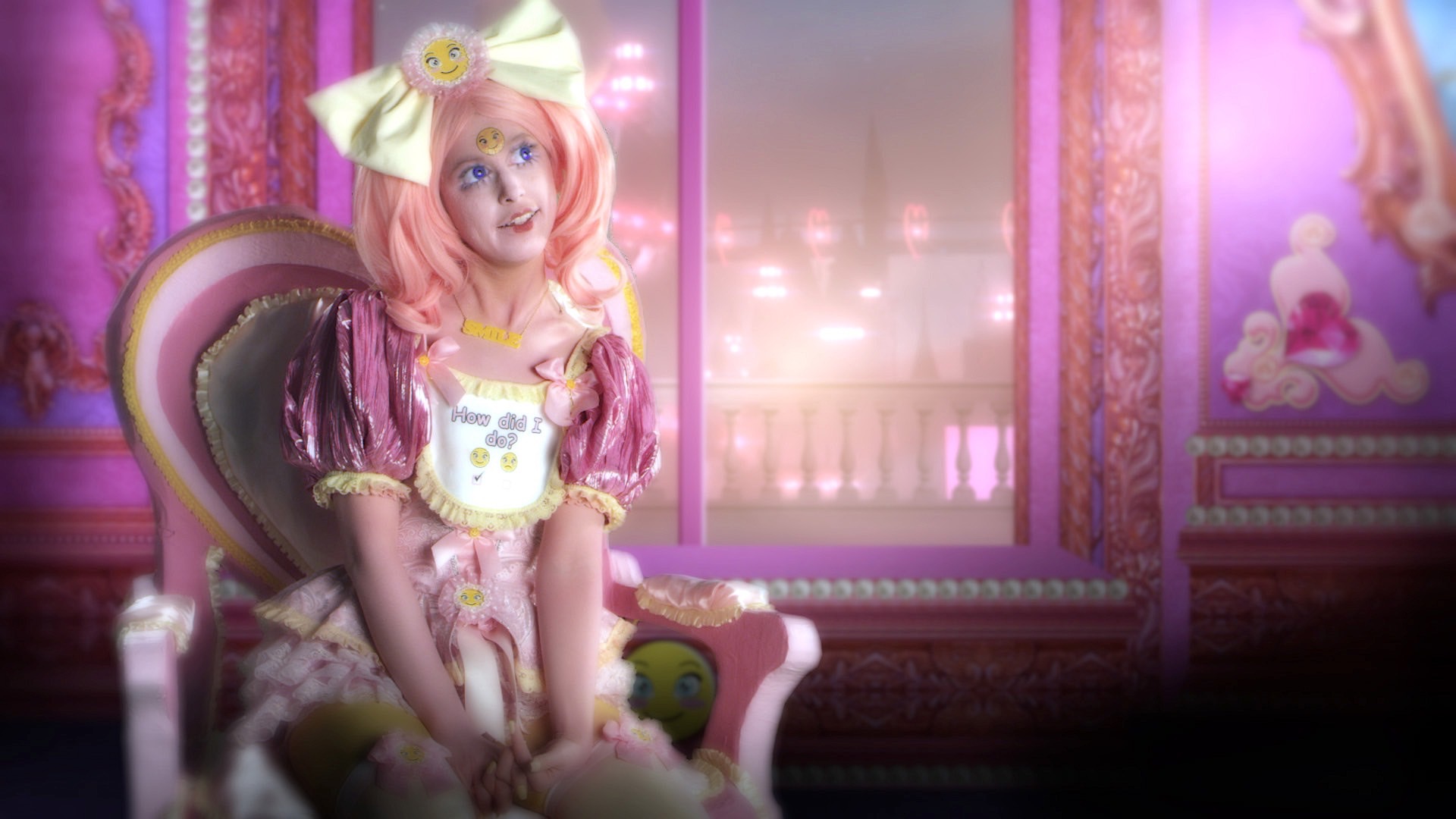 In Tiqquin’s Preliminary Materials for a Theory of the Young-Girl, [3] the Young-Girl is the logical conclusion of capitalism’s valorisation of youth and femininity to the point of ideological imperialism. The Young-Girl’s twin pursuits of happiness and beauty as outlined by Tiqquin are foundational to the world of Feed Me, where eternal youth is valued above all else, and constant professions of being ‘too happy’ ring out. Tiqquin’s Young-Girl is emptily ecstatic, just like Maclean’s characters, but threatening too  –  ‘TOO CUTE’ while at the same time ‘a beast’. The film is a deliberately tricky (and sticky) piece of commentary though, pushing against neatly defined conclusions like these. Feed Me is a distorted mirror, with plotting that twists and refracts itself, leaving the viewer confused about what was real or imagined, what happened when.

After being tricked into the Beast’s bed Maclean’s Little Girl is whimpering and upset at the betrayal… and then suddenly monstrous. Bearing spiky fangs as hideous as his, snarling mad, she holds the beast at (finger) gun-point and chastises him for his transgressions: ‘admit it, you’re TOO happy!’ In a world where everyone is striving for 110% but never given the means to reach it, the Beast’s delirium at successfully ensnaring the child is an injury greater than the kidnapping itself. Maclean dials the tension up and down as the scene progresses: a squawking toy startles the Little Girl back into a playful mood, but in the next moment she’s stony-faced, and her play-gun works. This is in some ways the fairytale ending we expect  –  Little Red Riding Hood realising that’s not grandma in her bed and enacting a bloody revenge. Except Maclean pulls a troubling bait and switch, and instead of the beast lying dead we see poor Granny in her bedsit, brains splattered against the wall.

When it comes to truth, we tend to see video as one of the more irrefutable mediums  –  we watch a clip on the news and take it at face value that it happened. Except, truth is much stickier than that. Truth, more often than not, is socially determined. Stickiness feels like the right kind of word for Rachel Maclean’s work too; it’s sweet and sickly and hard to get away from, clinging to you after you watch it and clinging to all the other things flying around in your head. Feed Me is set in a world controlled by a company that manufactures sweetness so cloying it makes your teeth ache, sugar-coating everything they do to obscure the truth. It’s a gingerbread world built to hide a bubbling, voracious cauldron. Scenes like the shooting leave us bewildered, unsure whether to trust what we saw actually happened, reeling from perspective to perspective.

The moment that stuck to me most after watching Feed Me comes towards the end, when the Little Girl and Old Man from Smile Inc meet for a sort of showdown in the street. In a twist that would feel magical in another setting, they begin to speak in one another’s voice. It’s impossible to tell whose dialogue is whose, each one spouting lines the other could easily have spoken, and the scene is wholly disorienting. Maclean is playing both characters, but their voices are dubbed over by actors, the film shot on green-screen, with the backgrounds artificially filled out later. Watching the scene play out in its cascades of artifice and performance, I kept thinking about deepfakes. The idea that our eyes can’t trust what they see anymore is a deeply poisonous one, that will further erode our ability to come to a consensus on literally anything. The scene has echoes of Gillian Wearing’s 10-16 [4], digging into what feels like the supreme wrongness of adults inhabiting children’s minds and vice versa.  Wearing has already begun to play with deepfakes in her work, and it’s easy to imagine that Maclean might soon react to them in her own practice  –  they are a cynical form of digital puppeteering that seem primed for the worlds Maclean builds.

Feed Me ends in a flurry of violence  –  one Little Girl shoots a patronising talent show judge live on air, and an army of hooded ‘thugs’ break into Smile Inc’s headquarters led by another Little Girl to, apparently, eat the Old Man CEO. What a thrill! the revolution is here! If you won’t feed them they’ll feed on you! Underestimate the Young-Girl at your peril! Except, it’s all watched over by the eyes of the Beast, hiding in an air vent, biding his time.

3 Tiqquin, Preliminary Materials for a Theory of the Young-Girl, Semiotext(e) (2012)

Jo Thompson is a Scottish writer based in London. She spends too much time on the internet, and is interested in the intersection of art, pop culture and tech. @joannat_is

Rachel Maclean's Feed Me (2015) was commissioned by FVU and Hayward Touring for British Art Show 8. Supported by Arts Council England and Creative Scotland.