No End In Sight

As the latest chapter of Afghanistan’s repeating cycle of history seems set to start, Steven Bode looks back at Marine Hugonnier’s Ariana and its resonance for the present moment. 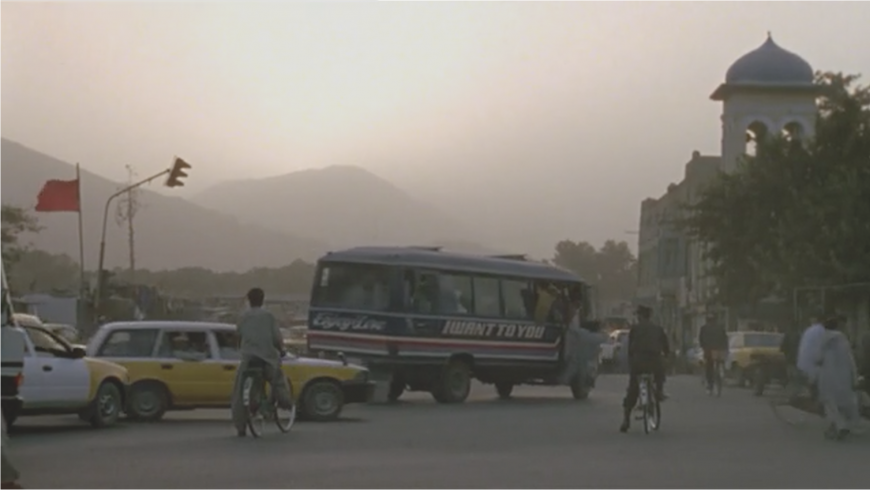 Marine Hugonnier first travelled to Afghanistan not long after what history may now have to record as the temporary defeat of the Taliban in 2001 to research what would become her essay film, Ariana (2003). She flew into Kabul with the Afghan national airline, whose four-syllable, feminine, almost fairy-tale name lends the film its title and a pre-echo of its poetic texture. Ariana opens, emblematically, with a window-seat aerial view from a plane soaring high over Afghanistan’s equally emblematic mountains, giving us a glimpse of the topographical features that dominate the landscape and tightly encircle the country. As first impressions go, it is a classic introduction to the haunting nature of this harsh and beautiful land, but is also a stand-in for the rush of exhilaration that any air passenger might get, as the clouds part and their destination is laid out beneath them in panoramic, cinematic detail. Yet, as Hugonnier’s voiceover quickly alludes, this point of view may not be so innocent, after all. Thoughts of war are never far away from this film, in the same way that spectres of conflict have loomed over this landscape for generations. The aerial vista so lyrically portrayed might just as easily represent the reconnaissance sweep of a military jet, surveying and patrolling what lies below.

This fleeting image – of high peaks dwarfed by recourse to an even loftier, overarching perspective – not only establishes the arc of the film but also acts as a prelude to a wider speculation on the foundational relationship between geography and history. If the presence of a mountain in an otherwise empty landscape invariably prompts some people to feel an urge to climb it (out of a need to conquer it, or simply to experience the commanding views from its summit), the presence of a mountain province in an uncertain geopolitical landscape has regularly provoked an equivalent need to capture it, if only to control the commanding views from its summit. This has been Afghanistan’s fate down the years – as a battlefield for competing interests and rival foreign powers. That said, it is equally the case that the fate of these warring parties, too, has been uniformly bleak – each one seeking a vantage point to secure an advantage, each one jockeying to be king of the hill, before discovering the lengths they would have to go simply to hold their position. Not for nothing is Afghanistan known as the ‘graveyard of empires’.

In Hugonnier’s film, this rugged land that has been so intensely fought over is a land that is being methodically pored over. A film crew assigned to an academic field study examining how topography determines history has left Kabul for the Panjshir Valley. This fertile enclave north of Kabul has long been suggested to be the site of a celebrated paradise garden from Persian mythology, and until very recently prided itself on being untouched by outside invasion, protected (and cut off) by its formidable mountains. A green oasis set magically apart from the stark, inhospitable terrain of much of the rest of the country, the valley and its inhabitants have always fiercely guarded its independence. In the words of Ariana’s narrator (voiced by Hugonnier herself, in the guise of a member of the fictional filming party), ‘neither of the two revolutionary utopias that had ruined the country had ever entered this place.’ The valley is a ‘state within a state’ – maybe even a miniature utopia of its own.

The film crew and the rest of their team, in the service of their observational, cartographic mission, are curious to understand what makes the location so special, and seek to climb the highest of the surrounding mountains to better see the extent of the valley spread out before them. But a landslide has made the route up impassable, and the definitive panoramic overview they were anticipating impossible. The absence of this apparently conclusive piece of information frustrates the group, while the enforced hiatus causes the narrator to start to wonder whether the totalising ambition contained in this panoramic money-shot isn’t also a symptom of a deeply engrained and militarily-minded will-to-control. Her misgivings grow when they set up a substitute for the missing panorama on the so-called ‘television hill’ on the outskirts of Kabul, on an expedition where they are escorted by an Afghan soldier, whose presence as an inadvertent Rückenfigur lends the scene an unwanted heroic aspect.

In an essay on Ariana, the critic Michael Newman provides a magisterial, appropriately 360-degree account of the phenomenon of the panorama as a pre-cinematic, optical entertainment, whose growing popularity in the nineteenth century was paralleled by an increased focus on forms of military surveillance (first by hot-air balloon, and later by aircraft). These twin impulses, enhanced and extended by technological developments, became even more inextricably linked, to the point where a multi-directional satellite view of the earth below is now a sine qua non of both a vicarious experience of the physical landscape (through digital means such as GoogleEarth) and a military oversight of it. In the twenty years since United States forces occupied Afghanistan in the aftermath of 9/11, the Pentagon relied increasingly on drone strikes to impose its will on the country – a fire raining down from a faraway city on a hill that drew forth a corresponding reaction and resentment on the ground. There is now talk, following the withdrawal of Allied troops, of expanding this ‘over-the-horizon’ capability, without recognition, it would seem, that a strategic need for a panoptical view that goes on forever is itself a factor in a war that goes on forever. In the theatre of operations that is Afghanistan, there is, literally and metaphorically, no end in sight. And while it may be true that an all-seeing eye in the sky is possible to maintain, events have proved that the moral high ground is never so easy to achieve.

Ariana was commissioned by MW Projects and Film and Video Umbrella in association with Chisenhale Gallery. Supported by the National Touring Programme of Arts Council England and sponsored by Marion and Guy Nagger and Alan Djanogly.