The Young Dog at the Zoo

Stand-up comedian, writer and director Stewart Lee asks whether comedy can ever be art in his essay on Patrick Goddard's film Animal Antics. 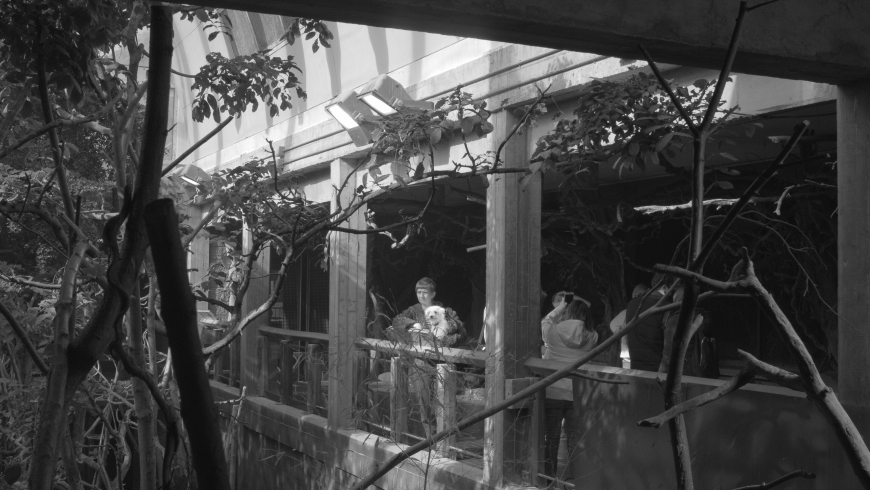 Patrick Goddard’s film Animal Antics is available with captions for audiences who need them on FVU WATCH, through the duration of its exhibition tour as part of British Art Show 9.

The stand-up comedian Simon Munnery, one of the world’s finest, once had a broadsheet newspaper review that described his work as "the closest comedy comes to art.” Not one to take these things at face value, the stand-up subsequently took to the stage holding a massive Venn diagram, of two huge empty circles, marked ART and COMEDY respectively, which, though they might come near each other, could never overlap. Comedy, it seemed, could never actually be Art.

The reviewer was wrong, of course. Simon Munnery’s Comedy is Art, undoubtedly.  But I wonder what they would make of Patrick Goddard’s film Animal Antics, which bounces between the two irreconcilable spheres of Art and Comedy throughout, in a pithy combination of humour and horror that is both beautiful and hilarious.

It is the near future, we assume. Sarah, played with catatonic forbearance by Phoebe Frances Brown, is visiting a zoo. She remembers how everyone loved David Attenborough, and her companion concludes that the presumably now late TV naturalist and former BBC Director of Programming “held this country together.” Sarah’s friend, who is both waspish and superior and yet simultaneously stupefyingly ignorant, doesn’t understand what the animals they are viewing really are. It appears that in Goddard’s plausibly banal future, most only experience the natural world through the filter of television, and it survives only in controlled environments like the zoo.

Sarah’s companion does not even understand the concept of ‘The Wild’ itself, seeing the word ‘wild’ only as a way of describing reckless or salacious behaviour, etymologically divorced from the untamed landscapes that coined it. And Sarah’s condescending companion is a dog, called Whoopsie, who can speak. It is the near future, as I said, and even this little furry slice of nature has been genetically modified out of its natural state into a form that serves the petty whims of the human world.

The creatures Whoopsie and Sarah observe remain mute. They offer no easy answers. But Whoopsie, who watches them, has been voiced by the artist and filmmaker Patrick Goddard, making his film Animal Antics a strange second cousin of Johnny Morris’ anthropomorphic ‘70s BBC children’s show Animal Magic. Here Morris would give voice to the animals, projecting human characteristics and class differentials onto them. Goddard in turn projects all the ignorance and indifference of modern man onto Whoopsie alone, leaving the animals themselves as blank canvases for the dog's failure to engage with the zoo’s filtered presentations of notions of nature in the raw, and their accidental abstract beauty.

Whoopsie sees the animals’ lives as failed attempts at the profit and pleasure driven lifestyles that are reckoned to be more valuable than their snuffling and fluttering futility. For Whoopsie, nature as encountered in the zoo is “a freakshow from the past kept alive in the mausoleum.” Whoopsie would doubtless do very well in government. I imagine a visit to an art gallery with the Culture Secretary Oliver Dowden would be very similar to a stroll around the zoo with Whoopsie, as the culture warrior in chief struggled to make mere economic sense of the not necessarily monetisable works he encountered.

Goddard’s contemplative camerawork, of animals behind bars staring blankly and engaged in neurotic repetitive tasks, evokes the tragedy of the dying imprisoned world. Asked to imagine what the lion would say if he could speak, Whoopsie suggests: “Everything the light touches is our kingdom.” This turns out to be a quote from Disney’s The Lion King, a leakage from the digital world Whoopsie understands, but it could equally well be an accidental assertion of man’s pyrrhic victory over the natural world.  Whoopsie lives not in the wild, but on-line in video games. Whoopsie does not hunt for prey, and cannot believe that animals ever did.  Instead she (Whooposie is, in fact, a she, despite being voiced by Goddard) orders artisanal free-range sausage rolls from a gourmet snack van and eats them off a paper plate; future landfill. She believes her pedigree breeding makes her better than nature’s bastard wild things, who don’t even know their own lineage. She likes meerkats because they are funny. She only understands Red Pandas as things she wishes she could take home and cuddle.

At one point, we see the point of view camera angle of a naked mole rat, as Whoopsie looms into the fish eye lens of its tank, pretending she is a God, in a scene reminiscent of Damien Hirst’s early installation, Rat Opera. “It’s a marvellous day. I have given you everything. And yet you always look so grumpy,” the dog-god declares. But Whoopsie’s comic burlesque turn has the hidden truth of great comedy. We are Gods now. Anything in nature that still exists only exists if we, the titans of the Anthropocene Age, choose to allow it to survive. Whole ecosystems fall on our say-so. Businessmen and bureaucrats meet in mountaintop resorts to barter the lives of billions of species against profit margins and progress, like Whoopsie regarding the rats.

Like Patrick Keiller in his 'Robinson' trilogy, Goddard has the guts to let his camera linger on unglossed images – ants clinging to the liferaft of a leaf, a naked mole rat slashing at a plastic tube with its teeth, a peacock fed popcorn by an idiot, a gila monster’s silent defeated stillness, the spacewalk floatation of a drifting turtle – asking us what we make of them. Inevitably, we impose our apocalyptic fears onto the struggling creatures, just as Whoopsie sees them as yet more evidence of the natural world’s essential and deserved unsuitability to survival.

Having scoured her own reflection for meaning, Whoopsie comes across the unused relic of the 1934 Bernard Lubetkin penguin pool that the birds rejected, because of its unsuitable slippery concrete surfaces. Whoopsie sees this as evidence of their inferiority. The Tecton pool is a design classic. “Modernism is wasted on animals,” she declares, before defining how her, and mankind’s, superiority over animals, lies in our ability to imagine things. But, comically, all Whoopsie’s examples of things she has ‘imagined’ are merely things she can see or remember. Whoopsie confuses imagination with eyesight and memory.

Nonetheless, she concludes: “Animals don’t have culture. That’s what we have. But they don’t. They are just wet machines... Are you scared your feelings won’t stand up to my cold hard facts?” Confronted by Sarah over her callousness, Whoopsie resorts to the rhetoric of the kind of incel alt-right winger that turns up on a GB News chatshow. “Rights don’t exist,” she asserts, “Boom! I’ve blown your little mind.”

But in a dark aquarium, illuminated jellyfish drift in spineless ellipses that defy definition. Sarah is spellbound. Whoopsie enjoys things where she can see them clearly, and neon beams focus her attention on the creatures. But for Whoopsie these natural beings have no essential nature in and of themselves, and come to life only when given shape and form by human intervention. If a jellyfish drifts unobserved in darkness is it even a jellyfish at all? Whoopsie concedes the neon light itself has made them ethereal. “Like a lava lamp,” she says, clutching at a simile drawn from kitsch furnishing to clarify her cut-price non-epiphany.

Whoopsie’s processes are backwards. For Whoopsie the mechanical world illuminates the natural one, not the other way around.  The countryside metaphors of Edward Thomas’ poetry would mean little to a child of today and nothing to a child of tomorrow. 'Haymaking', 'The Ashgrove' and 'The Hollow Wood'. A S Byatt’s 2011 novel Ragnarok explores how the death of the natural world has robbed the vocabulary of our imagination of untold numbers of natural metaphors and similes. There are not plenty more fish in the sea, but she remembers wading through them, ankle deep, on a North Eastern shore. Ten years ago Ragnarok seemed like a dark prophecy.  Now it would read like reportage. Finally we see ourselves in the genetically modified speaking dog. Whoopsie is an animal like us, divorced from her true nature, the world that once made her in rapid retreat.

Animal Antics struck a chord with me that Goddard could not have anticipated when I was asked to write these notes. From 2009 to 2016 I visited the zoo where the film was shot most weekdays, where I sat in the back of the café and wrote four series of BBC2’s Stewart Lee’s Comedy Vehicle in monastic isolation. Indeed, I became such a familiar face that in the end I was pressganged by zoologists into providing the voice for a spider, and you can still hear me imagining what the Black Widow might be imagining today if you put on the complimentary headphones and press the appropriate button in the insect house. But my Black Widow voiceover was simple comedy. Goddard's Animal Antics has crossed the great divide into art.

The Young Dog at the Zoo by Stewart Lee is commissioned by Film and Video Umbrella as part of the release of Animal Antics by Patrick Goddard.