Iris Long reflects on the machinations at play in Chris Zhongtian Yuan's Wuhan Punk, exploring the implications of restoring visual memory via the medium of film. 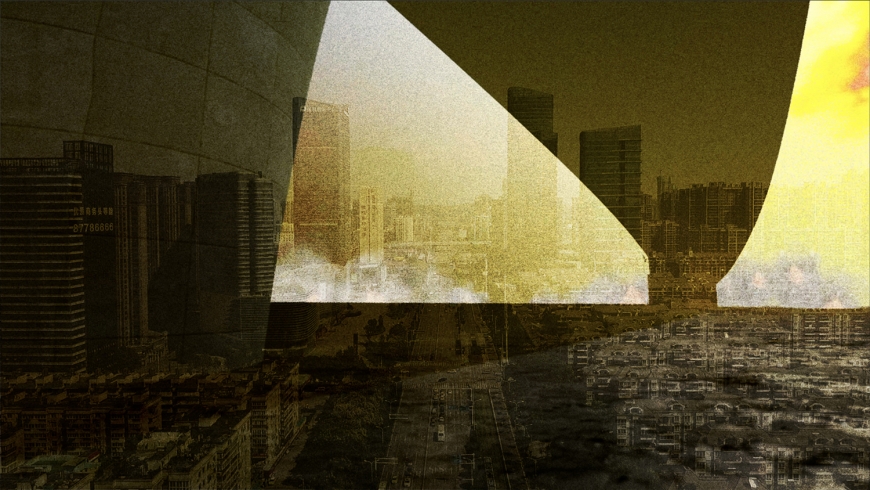 A smooth, grey, generic cube floating amongst three-dimensional coordinates will later be transformed into the most iconographic architectural component of a ‘city’, illuminated by an unnamed, mysterious light that only exists in a game engine called Unreal. Following this fleeting moment of pre-individuation, the cubes become riverside skyscrapers, until, in a sudden, instantaneous explosion, everything is rendered gold — not the glittering gold of the mask of Tutankhamen, but a glitchy gold; one that reminds you more of signal noise, burning, and dusted real-estate billboards. Or, in the words of Chris Zhongtian Yuan: “a kind of golden colour that typically appears when sunshine pierces through the nasty industrial smogs in Wuhan.”

What colour would you use if to revisit and render a piece of personal memory? We already live in a time when memory sticks seem to be more trustworthy than memories themselves. The story of Wuhan Punk is one artist’s effort to reconstruct what’s lost with a memory stick. The restoration of visual memories – nowadays heavily relying on high-resolution footage, captured photos and retina screens – can be tricky when the original files or devices are missing. Locked down in his studio in London, Zhongtian Yuan’s blurry memory traces became secret passages to another side of Wuhan – an alternative to the spectacle of ‘where the outbreak first took place’: a punk city, of real dwellers instead of statistical numbers, a place of whistle and roar. Punk bands began to flourish in Wuhan in the late 1990s, and the term ‘Wuhan Punk’ was first cited in a music journal in 1998 when the four most famous bands started to tour. In 2002, the underground punk magazine, CHAOS, was founded in Wuhan.

The film unfolds with a narrator muttering in Wuhan dialect under his breath, often overlaid with intense, frictional sounds. An instant uncanniness emerges from the absence of human perspective or human faces. The camera pushes and pans slowly, navigating amongst game engine rendered collages, drone shots, and very occasionally, found footage, as if the entire story is woven within this liminal space between the techno-realistic and the real. The rendered architectures are scattered with noisy points, painted with smoky colour and intentional fissures, with no hint of time or location. The drone sequences, by contrast, are so high in resolution and so smooth that they might easily come from promotional videos for any modern city in China.

While the narrator’s brief history of Wuhan punk bands takes viewers geographically through the simulated world – from Nanjing Yangtze River Bridge to Yellow Crane Tower and Youth Autonomous Centre – the drone footage twists the visual tones. The more manipulated and anamorphose the rendered footage, the more epic and serene the drone sequences become. The contiguous areas in between the two tones seem to reveal a dilemma about the image of a city or its particular history, especially after the drama this city brought to the world. Wuhan was unknown to many people living outside of China until the pandemic swept across; while the punk music scene was, and still is, unheard of to many Chinese people. The general impression of Wuhan is indistinguishable from Changsha, Hefei, Kunming, or any similar  ‘second-tier’ or ‘new first-tier’ cities. In the video, the city appears as monotonous blocks, as if inherited from a template of urbanisation. Perhaps this is precisely why most of the simulated imaginaries in the piece appear retro- or lo-fi: it’s the tone of fragmented personal memories, unspoken histories. The city becomes an allegory of certain living situations — themselves fragmented, unspoken; unrecognised.

Wuhan Punk never talks about philosophy, says the narrator. On the official website of SMZB, one of the Wuhan punk bands that’s still active, someone writes that “our lyrics are not political in the narrow sense, but merely what we want to express… we only do what’s comfortable, happy for us, and what we are capable of. Punk isn’t endowed with any special meaning to us, it’s just to our heart’s content.” Punk culture had its trademark attitudes and signature styles, but it also encouraged a feeling of freedom to do what you liked (and go against the prevailing consensus) that would have been interpreted differently in different places.

Wuhan Punk is no exception. It is not ‘a version’ or iteration of any existing punk movement, but rather celebrates a level of spontaneity away from ‘mundane daily life’ (in the narrator’s words), elements of which can be detected from the soundscape in Wuhan Punk: cars, bird tweets, markets, bonfires, fights, bustle, helicopters, motorbike engines, CCTV News excepts and, finally, sounds from live punk performances at VOX mixed with intense rainfall. 1998 was called ‘Year Zero’ because of floods; it was coincidentally also year zero of the term ‘Wuhan Punk’. “It seems like it’s gone through a cycle this year…” says the narrator. At this juncture, the visual reaches its most intense and equally ‘unreal’ moment: anonymous dykes and dams stand erect in endless water, indistinct silhouettes of viaducts, high-rise buildings, trees… The punks disappear along with the construction process the city endured, while the film winds down to a postlude of estrangement and melancholy.

Perhaps it’s worth returning to the name of the game engine, ‘Unreal’. The piece is not a single-sided critique of Wuhan's urbanisation, or a mere lament of the unfortunate disappearance of the punk bands, as well as the rebellious and resistant energy they stand for. It is a perplexing question of ‘resolution’ — how clear you see a subject, how many details emerge, and how ‘real’ it feels. The resolution of a city differs in thousands of ways — in a local’s eyes, in a compatriot’s eyes, in ‘global’ eyes. The resolution of a story also differs depending on the device: a flying drone or a render engine. In an age when the gigantic internet machine seems to provide a retina-level resolution archive of on-going history, is it still worth revisiting one’s personal memories, and reconstructing them? Wuhan Punk may provide an answer: sometimes it’s not about pixels contained in an image, but hidden layers embedded within it; it’s not about an optical resolution but a cognitive one, that is equally ‘unreal’ and very real.

Iris Long is a writer, artist and curator based in Beijing. She currently works as a researcher on art, science and technology at Central Academy of Fine Arts (China), with a research focus on how art responds to the current global reality of ubiquitous computing and Big Data. She is a graduate of the Critical Writing MA at Royal College of Art, London.

This text was written in response to Chris Zhongtian Yuan's Wuhan Punk, commissioned by Film and Video Umbrella as part of BEYOND