Responding to Chris Zhongtian Yuan's Wuhan Punk, Steven Bode reflects on how the city of Wuhan was previously famous for being the hotbed of China's punk rock scene. 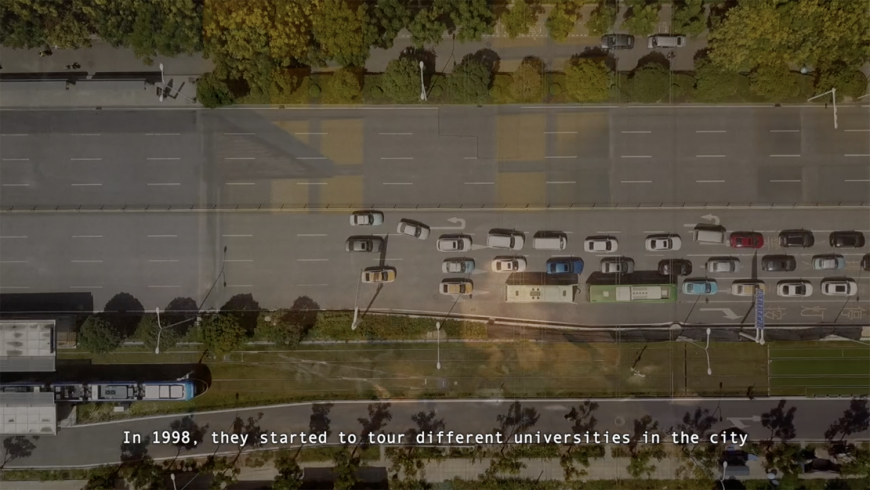 The city of Wuhan may never shake off its association as the ground-zero of the coronavirus pandemic. In the first weeks of 2020, in the new year equivalent of a small-hours wake-up call, news reports of a mysterious virus wreaking havoc in this hitherto anonymous conurbation in midland China drew worldwide attention to somewhere (and something) that many people had never had cause to reckon with before. Wuhan is actually China’s seventh-largest city – a metropolis of 11 million souls; one of a number of unsung urban powerhouses whose incessant thrum of round-the-clock industrial production reverberates across the globe. Wuhan has several parks, and two big lakes, though not too much else, it would seem, to commend it to the passing tourist. But, as Chris Zhongtian Yuan’s new video, Wuhan Punk, attests, it has one other claim to fame – as the former hotbed of China’s punk rock scene.

The punk phenomenon eventually spread to much of the planet, although it got to Wuhan quite late – certainly well after its first wave. Commentators increasingly speak of cultural trends ‘going viral’, but the march of punk feels more like an echo of a different era – reliant on the analogue virtues of underground knowledge and word of mouth rather than wildfire digital replication. In its passage into the popular mainstream, punk found a particularly receptive host in grim and grimy industrial zones (Manchester, Akron, Berlin), as if noise, dirt and an air of desolation were perfect conditions for it to thrive. Judging by Zhongtian Yuan’s vivid visual and aural evocation, with its claustrophobic assemblage of heavily treated imagery and its eerie cacophony of harsh, manufactured sounds, Wuhan in the 1990s had these three elements aplenty.

It also had a reputation as a feisty, rebellious city – more inclined to take inspiration from the Gang of Four than instruction from the Gang of Four. That renegade attitude is personified by the semi-legendary figure of Mai Dian (the erstwhile leader of the punk band Si Dou Le) whose influence is remembered in the film. An acolyte narrator mourns how the man and his music seem to have vanished without trace – although this may not be a wholly inappropriate fate for bands with nihilistic song titles such as  ‘No Compromise’ and ‘You Disappear’. In an anarcho-punk variant of Taoist principles, his Master’s voice lives on in ethereal spirit and in inspirational fragments, even though its material remnants may be lost. The history of punk is shrouded in myths, and the Wuhan clan are no exception. The narrator readily admits that his own memory is becoming hazy – as blurry and as ghostly as one of Wuhan’s notorious industrial smogs.

The narrator also laments the razing and erasing of the intimate, small-scale hangouts that the bands would have played, in particular a venue called the Youth Autonomous Centre, which was their home-from-home. One of Zhongtian Yuan’s atmospheric digital animations takes us inside its four walls, while another imagines it abandoned; overgrown by wild nature. Far more likely, of course, is that it has been knocked down and built over, a casualty of a wave of rapid urban development that we observe from drone cameras high above the city. In its rising clear of the noise and the pollution that used to characterise Wuhan, this elevated perspective reveals a bland identikit cityscape that is its contemporary architectural face.

The penultimate chapter of the film describes the threat of flooding that is an ever-present danger to the city. During the last twenty years, there have been several occasions when torrential rain and a dramatically swollen Yangtze river have placed Wuhan in mortal jeopardy. In 2020, of course, a catastrophe of Biblical proportions arrived from an unexpected quarter, catching Wuhan (and the world) unawares – the anticipated storm of elemental, climate forces blindsided and usurped by an invisible pestilence. Wuhan may be recovering from the initial effects of that outbreak, and may continue to develop and prosper, but the inference of Wuhan Punk is clear: if it is to do so, it needs to allow room for discordant, refusenik voices and unconventional, alternative spaces that counter an unhealthily dominant, unquestioned consensus. The film can be easily read as a critique of contemporary Chinese society, but it also has a more universal resonance – as a rebuke to the dispiriting advance of a faceless and anodyne urban expansion that is a prevalent feature of so many places. Formerly edgy and grungy areas may well be on the up, and property prices may well be soaring, but the uniformity and conformity that so often accompanies rampant gentrification is a plague on all our houses.

Steven Bode is Director at Film and Video Umbrella

This text was written in response to Chris Zhongtian Yuan's Wuhan Punk, commissioned by Film and Video Umbrella as part of BEYOND