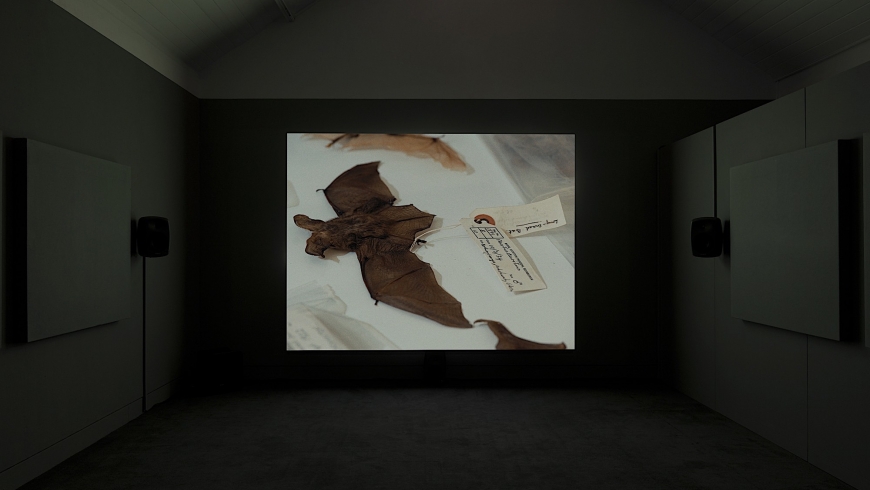 The Jerwood/FVU Awards 2018: Unintended Consequences premieres two newly commissioned moving-image installations by Maeve Brennan and Imran Perretta, the recipients of this fifth edition of the Awards.

At a moment when world events are so volatile and turbulent that it’s hard to predict what might happen next, the two artists’ works reflect the complex, entangled nature of contemporary experience.

Maeve Brennan’s Listening in the Dark gathers a series of subtle but penetrating soundings of human beings’ impact on the natural environment. While there is a growing sensitivity to the ecological damage we are causing, we can also be strangely blind to things that happen outside of our consciousness. A creature that has often fallen beneath our radar is the bat. Undisturbed, and largely unchanged, for millions of years, its nocturnal rhythms are being increasingly interrupted by the presence of wind turbines. While noting how these new (and well-intentioned) technological developments are affecting the atmosphere in ways we do not always appreciate, Brennan also illuminates how scientific research has revealed a whole sensory dimension that we were previously oblivious to.

The Jerwood/FVU Awards 2018: Unintended Consequences are a collaboration between Jerwood Charitable Foundation and Film and Video Umbrella, in association with University of East London. FVU is supported by Arts Council England.