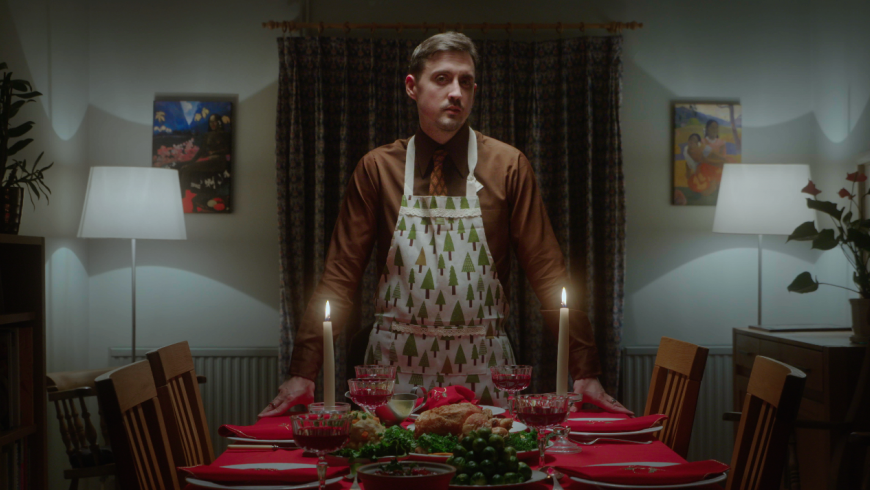 Artists Guy Oliver and Reman Sadani, winners of the Jerwood/FVU Awards 2020, will exhibit two newly commissioned moving-image works at Jerwood Arts this autumn. Simultaneously, this exhibition will show online for free. Responding to this year’s theme of Hindsight, each artist explores the power of reflection through film-making, how ideas shift through time and generations, and the complex nature of hindsight itself.

Guy Oliver’s film, You Know Nothing of My Work, is a multi-chapter rumination on the cultural dilemma of the disgraced popular icon, the tension between a problematic past and a more enlightened present, and the role of the male voice in a post-Me Too era. The work, which is his biggest commission to date, develops Oliver’s established practice of mixing pop culture references with self-deprecating character performances and complex social issues. Idiosyncratic in style and form, this moving-image work takes the unexpected form of a musical to unpick the notion of celebrity, toxic masculinity, and moral ambiguity. Oliver adopts various male archetypes as he probes what to do with the work of cultural icons such as Michael Jackson, Woody Allen, Kevin Spacey, and Bill Cosby. Stepping into the backdrop of familiar film and television sets, Oliver also looks specifically at British culture, particularly how to marry the importance of era-defining shows such as “Top of the Pops” with the knowledge of their systematic, institutional failure. By exploring this difficult subject through the medium of song and the device of rhyming couplets, Oliver blurs the comic and the tragic, questions his own stance on these issues, and allows the awkwardness of his position as a male artist to spill onto the screen. Collaborators on the project include: contributions from Rebecca Lucy Taylor / Self Esteem and Kevin Peterson “T1J”, with music by Suzy Davies featuring the The Angels of Kaos choir.

Whilst Oliver’s film shows how hindsight can cast a harsh light on the past, Reman Sadani’s Walkout 1, reflects how a preoccupation with the past could be considered a privilege when faced with the challenges of the present. Walkout 1 is set in a city that has been shrouded in dust, setting the film in a post-crisis, desert-like cityscape.  The poetic film explores the flaws of a society’s single viewpoint, in particular how a dominant ideology can be forced upon a younger generation. In order to lift the cloud of dust, four young characters are instructed by an elder who rigidly adheres to a vision, leading to doubts and questions from her followers. The nature of crisis shows that it is often impossible to ‘look back’ and reflect because of a present, urgent need for survival. The film draws on Sadani’s own experiences of growing up in Arab countries and later moving to the UK. Various contributors were interviewed about their own ideas of the city, which sparked discussions of flawed systems of authority, collective frustrations and changing political narratives, all of which helped Walkout 1 take shape. Having recently graduated from her BA at the Slade School of Fine Art, Sadani is the youngest ever awardee of the Jerwood/FVU Awards, and this film exemplifies the talent of someone who promises to be one of the art world’s rising stars.

This exhibition is also open at Jerwood Arts, London, from 29 October – 21 November 2020, find out more

Clip from Guy Oliver, 'You Know Nothing Of My Work'...